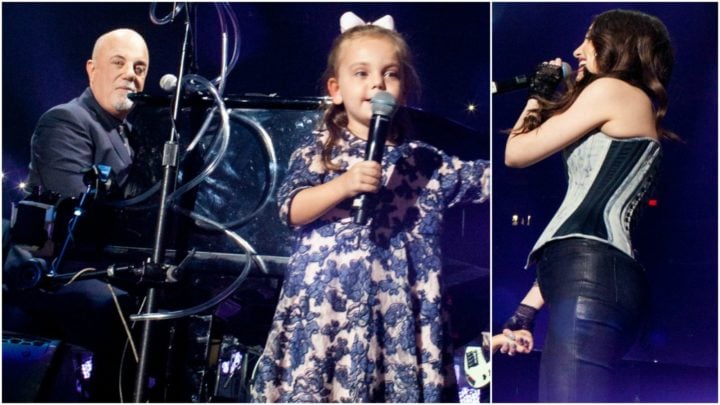 The singer was joined by Alexa Ray and Della on stage in New York on Thursday. Source: Getty.

Billy Joel is no stranger to performing in front of huge crowds, having enjoyed a mammoth career over the past four decades, and it seems that trait is something he has passed on to his children as two of his daughters joined him on stage this week.

As the star performed his sell-out gig at New York’s Madison Square Garden on Thursday, Joel’s daughters Alexa Ray and Della Rose, three, surprised him with an impromptu rendition of ‘Happy Birthday’ in honour of his 70th birthday.

The 33-year-old singer-songwriter, whose mother is Christie Brinkley, emerged on stage to perform her father’s hit ‘New York State of Mind’ alongside him.

After finishing the duet, she said: “I want you guys to join me in a little song for Mr New York State of Mind over here.” She then announced the arrival of her sweet younger sister, telling the crowd: “Ladies and gentleman, Miss Della Rose!”

As the pair began signing the crowd joined in with the song, wishing Billy a happy birthday, as a cake was brought out and placed on his piano, while Billy and his band played.

After their performance, little Della got a kiss from her dad before running into the arms of her mum Alexis Roderick, who married Joel in 2015. But, before leaving the stage, she gave a final wave to the 20,000 fans who clapped and cheered.

Videos of the sweet family tribute have been shared online, with people praising little Della for her confident performance.

Alexa is the Piano Man’s first child with ex-wife Christie Brinkley, who he was married to from 1985 until 1994. He has been married a total of four times.

He tied the knot with his current wife Alexis in 2015 and the couple share three-year-old Della Rose Joel and one-year-old Remy Anne Joel together.

Are you a fan of Billy Joel’s music? Do you have a birthday message for the star?