The true meaning behind an Indian head shake 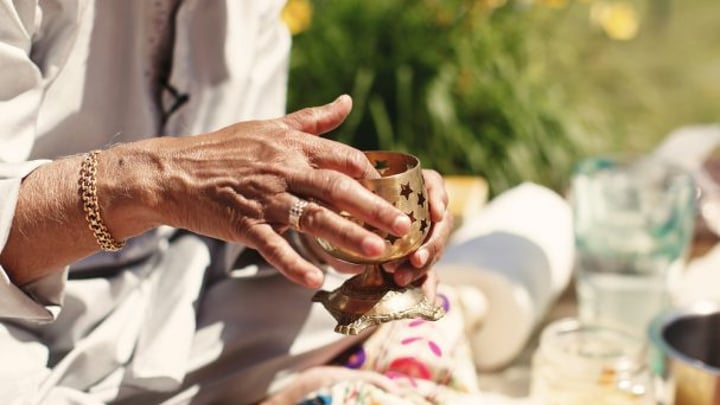 You may remember in the last offering I was placing considerable weight on the healing power of turmeric, which our homestay host Joseph had prescribed to stop the bleeding on my shin mishap. Although the bleeding had basically stopped, I wasn’t feeling the best and decided to take an antibiotic I’d brought with me. Although I awoke this morning feeling a bit better, the madam of the house had decreed that I should stop at the hospital to get them to check on the dressing. (I didn’t have one. I just kept piling more turmeric on the open wound.)

We travelled with Earthen Experiences and stayed at the Soma Palace Resort, a beautiful hotel on a small island that can only be reached by boat. It was conceived with the idea of recreating the subdued charm of Kerala in the 18th and 19th centuries and does this very well indeed. Anyway, a trip to the hospital means a boat trip followed by 10 kilometres by car. A new driver, Vishnu, has replaced Mani who has rushed home to fine-tune the plans for his engagement party.

The hospital is not salubrious and when I’m led in to see the doctor I’m sharing the outpatients’ area with several women who appear to be having treatment that is causing them considerable pain. I roll up my trousers for the doctor, who stares intently at the wound.

“What is this?” He enquires with a couple of head shakes.

More head shaking and he explains this to a group of nurses who also begin shaking their heads and giggling. The whole ward seems to be shaking and it’s obviously causing considerable mirth.

The doctor’s English is not the best but he manages to explain to me that the wound needs to be cleaned (I thought I’d already done that) and that turmeric should only be used to stop the bleeding. It was not an antiseptic. He delivers this last bit of information with another little shake of the head.

Read more: Knitters come to the rescue for elephants in India

I’ve never quite got the gist of the Indian head shake. It seems it can be used as a form of greeting, a goodbye, a gesture of agreement, a polite way of saying no or in my case probably “look at this idiot foreigner who’s been splattering himself with turmeric “

To say that cleaning the open wound was painful is a bit of an understatement. I sympathised immensely with the women whimpering on the other beds. While the cleansing is going, on a female doctor enters and looks down. And shakes her head. She’s followed by two other male doctors who look at me smiling and then shake their heads vigorously.

Eventually the wound is cleaned and dressed and I’m ready to go.

“No more turmeric?” I enquire to the doctor, who is now sitting beside the female doctor who is giving a painful injection to a supine sari-clad lady.

“No!!” They reply in unison. Then they shake their heads.

Have you had a similar encounter in India?