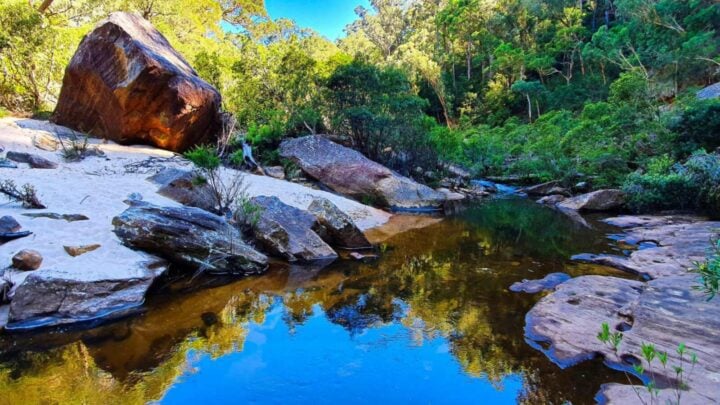 Glenbrook Gorge is a freshwater tributary of the Nepean River. It is located within the Blue Mountains of New South Wales, Australia. Source: Ian Smith

Knowing that all the bushwalkers I ever seem to go out with will give you an answer back in Latin just to flaunt their knowledge without adding to mine, I queried, “What sort of banksia is that?”

He looked quizzical and a wry smile came over his face. “I should know, I was a Banksia Man, but I don’t, sorry.”

We were just short of our fourth hour of scouring deep into Glenbrook Gorge, a canyon of sandstone delights in the Blue Mountains of New South Wales where rock-hopping and cobweb brushing are the main activities. In fact, if you dislike either activity, you’d do well to avoid the place.

I was walking with Ian C. Smith, not to be confused with etc. … Though we’re both into photography, he has a Canon that he likes to use for streaky waterfall shots and, because that necessitates using a tripod, it adds even further to the time he uses up taking his dodgy battery in and out of the camera every time he’s finished. Apparently it got saturated once and it’s never been the same; so he has to remove it after every session while I’m going crazy shooting everything from massive sandstone walls to dragonflies, and there’s a lot in between!

We were almost at the end of our walk when the banksia incident occurred and he went on to explain how he’d been a Banksia Man at the Sydney Olympics. Trained every weekend for six months before the event. It’s no wonder the Sydney Games set the standard.

I’d caught the train up from Parramatta and Ian picked me up at Glenbrook and we headed immediately for the main track leading down. It was just 8am as we bailed out and set sail. While I had 11 compulsory photo stops while descending, Ian’s camera sat comfortably in his backpack.

Finally, at the lower reaches of the canyon, the trail not only flattened out but ceased to be a trail. Now it was rock-hopping par excellence, because the only thing you can follow is the river and, in many places, rock falls have raised the difficulty level. There are times when you have some doubts about whether or not you can get further but, other people, though few in number, have done it.

The sun intermittently splashed light into the bowels of the gorge, sometimes creating photo opportunities, other times thwarting them. Now Ian was starting to stop as we came upon small cascades from time to time so I didn’t feel so guilty about dragging the chain while he set up all his gear. At times we paused to savour the place, the only interruption an echoing blast from a train’s horn as it entered the tunnel far above.

All around were spectacular eroded cliffs of sandstone, weathered in a hundred different patterns. Here a pock marked square, there a rounded cave. In the river several large boulders had semi-circular patterns scoured in them during times of flood, others had undercuts that would ultimately cause the collapse of large slabs and some already had, thereby changing the course of the creek flow forever.

Mostly unseen spiders and a few dragonflies were the only life we saw other than flora. A few almost hidden flowers, an out-of-place palm, sundew clinging to rock beside the falls and the banksia spinulosa (variation Cunninghamii) were the contrast with the trees.

Somehow my knees didn’t mind the constant scrambling. Compared to walking on a flat hard surface it was bliss; for so many others it would be the reverse. Were a proper walkway to be erected here I imagine it would become extremely popular, but then, it just wouldn’t be the same. The sound of silence; that filtered resonance of non-threatening background noise orchestrated by the stream, has a palpable calming effect on the soul as you chew on some dried mango and sip your special brew on a secluded slab of rock.

Knowing whether or not it’s time to go back is problematic and we discuss it from time to until we finally turn around. The return journey is a bonus because the light has changed with the rising sun and a multitude of different angles present themselves. In one spot the water is so clear that you have to peer to even know it’s there.

All too soon we reach the start of the climb back to the car. It’s amazing how it always seems shorter on the way back and we’re soon at the top, though Ian was struggling a little with the uphill; tries to blame his age but, since I’m three years older, it falls on deaf ears.

We adjourn to the gourmet pie shop at Glenbrook, take a seat outside and watch the passing parade. Days don’t get much better than this.