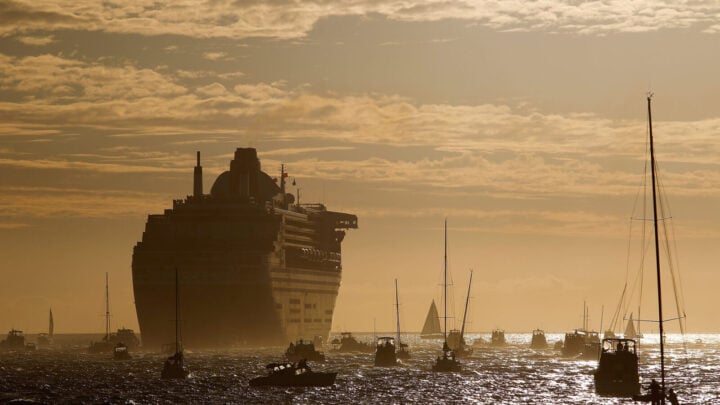 There are two great and famous waterways in the world, both man-made, both saving billions of dollars every year for some of our largest companies. They are, of course, the Panama Canal and the Suez Canal. Jacqui and I have had the experience of traveling through both of them, the Panama in 1959 on our way to New Zealand on board the Rangitoto, and the Suez late in 1963, returning to England on the SS Oriana, two trips we’ll never forget!

It’s very difficult to compare one waterway with the other because they are so different. One is narrow, running through jungle most of the way while the other is wide, very wide, and is cut through desert. About the only similarity between the two is the fact that they both contain water, and even then there are a couple of major differences, with the Panama containing fresh water, the Suez sea water, and the Panama containing many locks to raise ships 26m over an intruding range of hills, while Suez is lockless, never rising above natural sea level.

As I said, it was a very long time ago that we sailed from the Atlantic Ocean and the Caribbean into the Panama Canal and the Pacific Ocean, and at the time we were still filled with the excitement of a half-way round the world trip, having never even been abroad before, (except a holiday in the Channel Islands for me and a school-trip to Paris for Jacqui), plus we had only been married for a few weeks, so my memory of that cruise through the Canal is now a little hazy!

But several things became firmly stuck in my mind; the new and exotic things that were happening to us, simple things like noticing quite clearly as we left the cold waters of the English channel and sailed south-west towards the tropics, that the sound of the sea, rushing past the bows of the ship became distinctly softer than the harsher hiss it made when we started.

The first part of the Panama Canal, at Colon, was very much like any dock I have ever been in – tall cranes and taller buildings, a backdrop to the considerable number of ships waiting their turn to pass through. But as soon as we left the industry behind and entered the canal properly, I was surprised, to say the least, to see how narrow the waterway was. To my inexperienced eye it looked as if we only had a few feet to spare on each side, though I have no doubt in retrospect that there was considerably more than that (the width of the waterway is about 35 meters and the length 80 kilometres).

The next thing that impressed me, was the locks. These beautiful stone structures are even narrower than the canal itself with tiny, mobile engines on each side. These were the tugs that towed us through the locks and up through the various levels to the highest point, necessary because a ship under its own power could very easily crash into the close lock walls and do considerable damage, not to mention the cost if the canal had to close for such a reason.

The middle part of the canal isn’t actually canal at all, but a very large stretch of water, Lake Gatun, man-made to provide head water for the many locks. At the southern end of the canal stands Panama City, which is more of a resort town where ships’ passengers often stay overnight before heading on towards Australia – many entertainments are on offer for visitors!

The Suez Canal on the other hand is about 100m wide with desert on the eastern shore and moderate cultivation on the west. It runs from Suez to Port Said, situated on Egypt’s northern coastline near Israel, and as previously mentioned is lockless due to the low nature of the countryside it passes through. The length of the waterway is about 200km, part of which, is a lake.

When we passed through, the whole canal was dotted with shipwrecks, scuttled there by the Egyptians during the Six-Day War, to block shipping, but now only narrowing the passage.
Many of the SS Oriana’s passengers left the ship at Suez instead of going through the canal on board the ship; they detoured to the great pyramids instead, a side trip we were unable to take unfortunately, with two young children and very little available cash!

I’m certainly glad we had the opportunity to travel on both of these famous waterways, it’s almost impossible to guess just how different they are from each other, without experiencing it in person, and of course it’s not so easy to do now anyway, with flying being so much cheaper than going by sea!

I wonder if they have changed much themselves in the intervening 57 years since we were there.

Have you sailed on the Panama Canal or Suez Canal?