Joining the herd: True tales from the road 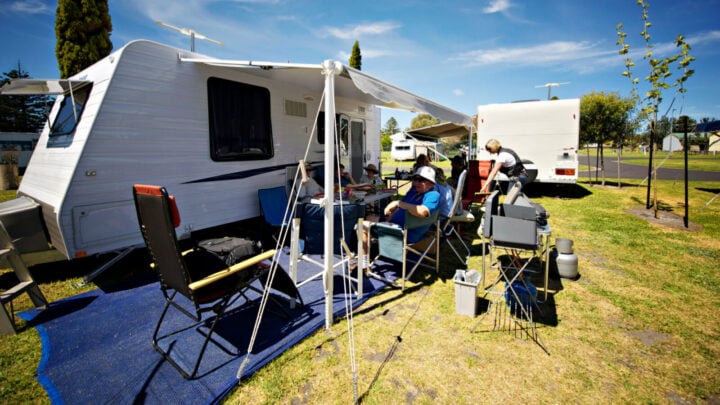 The happy hour cackles once reminded me of a megaphone left on in a hen house. Source: Getty

We try to solo camp whenever we can, but sometimes you have to join the herd. All matter of things bring you back to the pack. Sometimes you don’t want to risk the fine of stopping overnight when you’re in ‘no camping overnight’ towns. Sometimes you are in remote towns where, for safety, the van parks lock the gates at 7pm and patrol the barbwire topped perimeter throughout the night. Sometimes you just need a shower or a swim or to do a load of washing. No matter where you are in Australia, or what brought you back to the drove, you’ll always find the same mob at the camp site.

When I first joined the herd, I was easily annoyed by everything. I’d naively thought tolerance and tongue holding were associated with workplaces, not holiday destinations. Like Charlie Drake singing My Boomerang Won’t Come Back on NAIDOC day – boy did I get that wrong! Now that I’ve done some time with the flock, I’m starting to understand this Sesame Street of characters.

There’s Barry with the big rig. He’s been towing vans since you were a mishap in your mother’s morals. With all that experience, he knows exactly how everyone should have reversed their vans, secured their awnings, and positioned their solar. A regular contributor to caravanning forums, you can ask Barry anything because he knows everything. He’s already been everywhere you want to go – twice – and he has the stories to prove it. I used to get annoyed when Barry would run his generator in the afternoon, but now I understand he’s cooling the van for his bride, Beryl, whose nights are haunted by hot flushes.

I first met Beryl at the clothesline. She was stern-faced and short for words, but she could fold a sheet with the elegance of an origami master. Beryl believes in common sense and getting on with it but drive over her power chords or walk through her annex and she’ll give you what for. I like Beryl best when she’s by the pool. She’s the only one brave enough to tell the kids to stop running and to splash somewhere else.

The kids belong to Jason and Kylie. There’s a brood of them and one of them is named Willow. Travelling bloggers, this family loves life on the road. The kids do a couple of hours of school in the morning while Dad uploads his photos and footage to their YouTube channel. By the time they’ve hit the pool, they are ready to burn up some energy. The kids run around playing chasing games, they bang pool noodles together making thunderclaps and they call out countless rounds of Marco Polo. When they go, we all exhale, grateful for the peace that Jason and Kylie never get.

Whether in the pool or at the bar, Have-a-Chat used to drive me mad when he would engage us in never-ending conversation. Now I want to high five him as I leave my extroverted husband to talk while I sneak away for some introverted alone time.

Marg, who has just come back from a hike that we must do, has a way of making you wish she was your nanna as she tells you all about her grandkids before busting out 20 laps in the pool. No wonder she’s so trim and energetic.

I used to think Doris was hiding in the van because she was antisocial, now I know that she prefers to be reading than making pointless chit-chat she’s heard a hundred times before. When you see her peeping through the blinds, she’s not really watching you. She’s checking to see if the coast is clear before she makes a dart for the shower block. Her husband Wally thinks Barry’s a wanker – but only because it’s true.

The YOLO’s happy hour cackles once reminded me of a megaphone left on in a hen house. Now I’m happy they are enjoying the wine they’ll have to give up when they all go back to their AA meetings. Until then, you only live once! Cheers!

No-one’s happy when Trent turns up with his ute, his swag and his mates. It’s not so much his loud music or his girlfriend with the annoying laugh we dislike, it’s the reminder that we too were once young and arrogant.

There are still some characters I’m yet to work out, like the bastard who bangs around at 6am playing morning television with the window open for everyone to hear, and the thoughtless git who leaves their washing on the line for the whole day, preventing anyone else from getting theirs dried.

As for me? I’m Jo. I sit on the banana chair by the pool all day and type away on my laptop. You’d look at me and think she should get off her computer and enjoy this beautiful country of ours. What? And miss out on taking the piss out of you lot? My arse!

Can you relate to this? What funny camping folk have you encountered over the years?