Parenting in the ’70s and ’80s: Things we did then that would raise eyebrows now 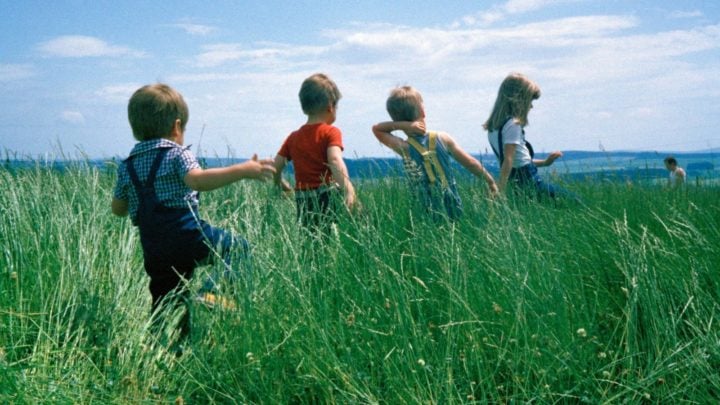 "Be back in time for dinner!" Source: Getty Images

New parents nowadays are living in an entirely different era to the one you were raising your family in and there’s often been talk that children raised in the 1970s and ’80s had it made. Not only were people starting their families earlier (many women were married in their early-20s and starting to have babies by the time they were 25) but there was a more apparent laid-back approach to parenting.

Naturally, when you look back at the things you did as parents in the ’70s and ’80s, one might wonder how on earth your children survived. Let’s face it, you didn’t have the expansive list of parenting resources or apps that new parents have today. There are so many options for feeding, sleeping and disciplining babies and children today it’s surprising anything gets achieved at all. Yet when you were raising your babies, you only had your parents or family friends to look to for advice and guidance.

It’s not uncommon for families today to be more spread out and new parents are quick to venture online — where there are thousands of sites — in search of an answer to their parenting question. But what are some of the things you did in your parenting days that would raise eyebrows in the parenting world today?

No baby capsule or car seat? No worries …

When it was time for mum and bub to head home from the hospital, baby was bundled up and placed gently in the car but there was no car seat! It was completely normal for someone to hold onto baby for the journey home.

Nowadays you’d be slapped with a fine quicker than you could say ‘please forgive my baby brain’.

What the heck is a playdate?

Today’s babies come with an appointment book that must be filled with playdates and social outings by Mummy and Daddy, and this is all before they turn five. When your children were young there wasn’t really such organised occasions for your children.

It was not uncommon for you to tell your children to “go outside and play” or “be home for dinner”, which often led to them roaming the streets in search of neighbours’ children who were home and able to play. Most new parents today would have heart palpitations if their little one ventured further than the end of the driveway unsupervised.

There wasn’t an over-scheduling of your child’s time either. Often you’d leave your children to their own devices, especially by the time they were school aged. So long as homework was done, what happened between then and dinner time was really up to the child. That was the perfect opportunity for children to get creative and use their imaginations.

Having kids today requires more careful planning. For example, “Are you going to be free on Tuesday at 3:30pm because Little Annie has a dance rehearsal after school, but I can see on the calendar that Little Henry needs to be at basketball practice by 4pm and there’s no way I can make it …?” And when you factor in today’s parent’s weekend commitments where they could be driving in 20 different directions for their child’s pursuits, there’s a fair amount of structure required.

Patch it up and move on

If ever your children presented you with a pair of trousers with a hole in them, chance are you stitched it up and returned it to them to wear. Yet few parents have the time today to sit down together for a family meal, let alone spend a few minutes sewing their child’s clothes back together. Clothes are manufactured rather cheaply today so they aren’t made to last more than a season and if the state of said child’s clothes becomes something of an embarrassment it’s not too much to buy something to replace it. Convenient, but extremely wasteful.

Germs were not scary

How many of your children presented you with frogs captured from drains or lizards found in the backyard? As unappealing as such ‘gifts’ were, it was not uncommon for your kids to keep such things inside the house. Today’s kids might be able to find such creatures and hold them hostage, but there are few parents who wouldn’t shriek in fear at the number of germs that little blighter has and how it’s so disgusting it has to stay outside.

Even pre-coronavirus, parents today would walk around with a pack of disinfectant wet wipes hidden in their nappy bags or handbags in anticipation of occasions where a quick wipe was required. The children of today cannot even sit in the shopping trolley without having an elasticised protective covering over it to prevent germs from crawling up their legs and into their knickers.

What about rolling in the dirt in a playground or park? Forget about it!

Put your hands up if you let your children drive? When this question was asked around the Starts at 60 office, almost every child born in the ’70s and ’80s said it was one of their fondest memories.

Chances are you let your child sit on your lap and steer the car while you operated the accelerator and brake. Of course there was one staffer who recalled the time her younger sister did this with her mother, except Mum pressed ‘Go’ instead of ‘Stop’ and the car went through the garden shed at the end of the carport.

It would be a rare parent today who would even consider letting their small child do such a thing while the car’s engine was actually running.

It’s almost a shame that many of today’s kids won’t know the joys of bouncing around unbelted in the back of a car (we’re joking) or eating dirt as part of a balanced diet. My, how things have changed!

What memories of your early days as a parent stand out for you most? Do you think parents today have it harder or easier than you did?