‘Video calls were vital for keeping my family connected during coronavirus’ 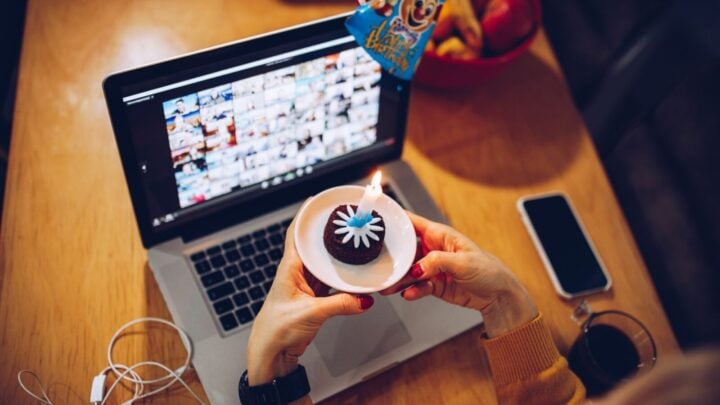 Birthdays, christenings, weddings and even funerals were without family and friends during coronavirus, which made connecting via video chat all the more important. Source: Getty Images

The past year may have taught us the new meaning of ‘Zoom’ but, when a great-grandmother needs to ‘spend a penny’, she doesn’t care what ‘damn ethereal, web-mister, why-fi roadmap’ is listening. Like many Aussie families, mine is spread geographically throughout this great brown land and no coronavirus was strong enough to break our Aussie spirit. Old Mate came close though.

We set-up regular Zoom catch-ups. You know, video chatting that allows multiple users at the one time; perfect for workplaces who were forced to go remote during the pandemic and those families, like mine, scattered all about the place unable to get-together face-to-face.

It felt comfortable, like an old friend; lovely. So, not only was our ‘village’ (family and friends) geographically challenged, we were deliciously multi-generational and multi-cultural. Our eldest human is 96 years old, our youngest, thus far, is two. We’re a mish-mash of countries of origin, two centuries, mixed experiences and family heritage, and I love it. A Heinz 57 of tradition, if you will.

Personally, I encourage all the twists and turns of the Aussie language influence; within reason of course.

However, 2020 taught this family one sad fact, we had been a hatched, matched and dispatched of get-togethers: christenings, marriages and funerals. During the year like no other, none of the usual were to happen. Undaunted and determined to save our rich tapestry of fire-side communication, I introduced my mob to … Zoom!

Communication through little family-group rectangles — like little boxes made of ticky-tacky (Huh?) — each participant, in turn, asking after health and offspring,
swapping recipes and home-schooling ideas and projects. The platform seemed an unbelievably comfortable fit for us all, given the newness of the medium. (I’m sure I recognised this ‘group’ conversation, on one screen all at the same time; why did this ring a bell?)

All systems go. Countdown July 13, 2020, 5:30pm. Lift off! As previously hinted, the first words of our wonderful family reunion belonged to great-grandma as she announced, “Oh, I need to spend a penny”, as Master Five raced to his coin collection, bless him. We’ll explain it to him later.

Great-grandma’s son, great-uncle, was London born but continues to overcompensate this ’embarrassment’ by overdoing his ‘Straya accent and idioms; I just don’t remember it being this … Um … pronounced.

“It’s okay, the old lady just means she needs to ‘syphon the python’. Oops, no, that’s me [*guffaw*]. I need to point Percy at the porcelain and shake hands with the unemployed. Hurry up Mum.” Raucous laughter.

“Strewth, I swear she’s a few sandwiches short of a picnic these days, ya know, got a few roos loose in the top paddock.”

My voice seemed to be crackling: “Oh, did I mention Father Terry and a few neighbours have popped in to say hi? Sounds like you’ve had a few bevvies.” (Did you see my mistake here? Using Australian slang, to chastise and discourage the use of Australian slang, was a particularly bad idea. I swear, in my mind, it’s like one little door/window closes but another opens almost immediately. Deja vu, even soothing.)

“See, old mate said come over this arvo for a few, cause his missus was MIA. Gazza said just wear your budgie smugglers; roger that says I. Jonno bailed [with the Maccas], the bogan bludger, cause he says the Booze Bus was parked around the corner from the bottle-o. So we’re just gonna have some snags on the barbie. Got a slab here so just bring a few tinnies; we can always chuck a sickie tomorrow. The job’s hard yakka and a bit iffy, but the green stuff under the table is a beauty. Anyway, told ’em I had to talk to rellies on Boom for a minute and not to start Acca Dacca until I got back. So, what are yous up to?”

“Nanny, what’s he talking about?” asks Master Nine as Master 5 rushed in with a penny for Great-grandma.

Rowan and Martin’s Laugh-In, that American television show from the 1960s and ’70s. Yes, that’s what this reminds me of! Remember the ‘Wall of Completely Inappropriate Comments and Questions’; all those little windows and doors opening and closing … So funny!

Oh gosh no, I have no memory of the rest of 2020. I discovered deep diving into large vats of very dry martinis, looking for the perfect olive most satisfying. I got Zoomed and remained so. One ringy-dingy, two ringy-dingy. Do you hear bells? Was that a chicken joke?

Have you been separated from loved ones due to coronavirus? How are you staying connected?