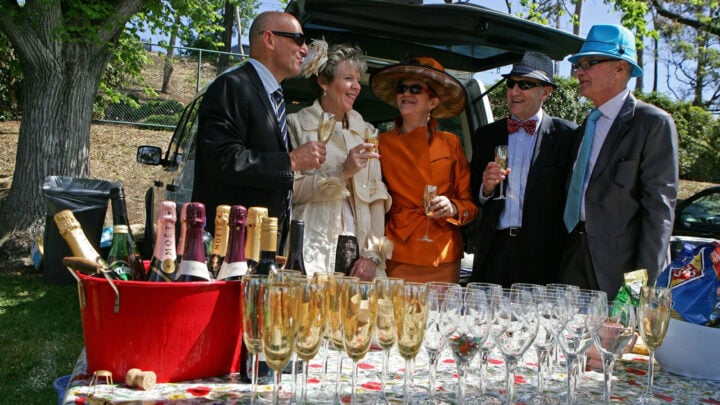 Racegoers enjoying a champagne breakfast in the members' carpark during the 2009 Melbourne Cup Day, at Flemington Racecourse. Source: Getty

In November 1987, just three days after we had arrived in Australia from the UK, we decided to head along to our first Melbourne Cup for the famous race that “stops a nation”. It was a day that surprised us, to say the least, as we had never experienced anything even remotely like the Flemington Racecourse carpark before, but we loved it and went back again in following years.

Filmed avariciously by news stations from just about everywhere, almost as much camera time was taken up with the goings-on in the racecourse carpark as inside the track! Thousands of cars parked there, full of mainly young people who came more for the good times going on out there than for the race itself! They dressed up in weird costumes, with large supplies of food, even larger supplies of booze (mainly champagne!) and were mostly in good humour – with one group even bringing a mobile spa bath with them!

That first visit, just days after we arrived in the country, almost turned into a disaster. I’d just bought a Ford Falcon for job seeking, home hunting and food gathering, and we decided to use it to go to the races. I should interject here that we have two sons who were already living in Melbourne at the time, and the boys were eager to show us newcomers where the track was, as much as anything else. We arrived at the Flemington Racecourse carpark about 8am and – along with everyone else around us – got stuck into the champagne and cold chicken. By 10.30am I must have consumed about half a bottle of the fizzy stuff, and it was then that I stopped drinking.

By 4.30pm we had seen all we wanted to see and decided to head home. We got into my nice new car as quickly as we could and drove out, trying to beat the upcoming rush. About a kilometre down the road from the track we arrived at a police booze bus and were stopped. This didn’t worry me too much as I’d had my last drink six hours earlier, but that was when I got the shock of my life! The policeman looked at my test result, paused, and then said the fateful words, “You have tested positive, Sir!” I panicked a little and spouted something like, “Oh god, don’t say that, I’ve only lived in Australia for three days and I need the car to get a job!” Again that dreadful pause, then after looking at me carefully for what seemed like a year he said, “Okay Sir, you’re only just positive, so I’m going to let you go this time, but drive very carefully all the way home,” and he signalled me to drive on! I learnt a very valuable lesson that day: if you drink champagne for a couple of hours, you still won’t pass a breath test six hours later!

I don’t know what life at the Melbourne Cup carpark is like these days. In recent years, watching on television, it hasn’t looked as though things are quite as crazy as they were back in the 1980s! We now live about 250km further away from the track than we did in those heady early days and we’re 30 years older now, so I very much doubt that we shall attend another Melbourne Cup day in person. We do have some happy memories of the visits we made though. It’s one of Australia’s great experiences!

Have you ever attended the Melbourne Cup at Flemington? What are your memories of it?