Road trips in the old car 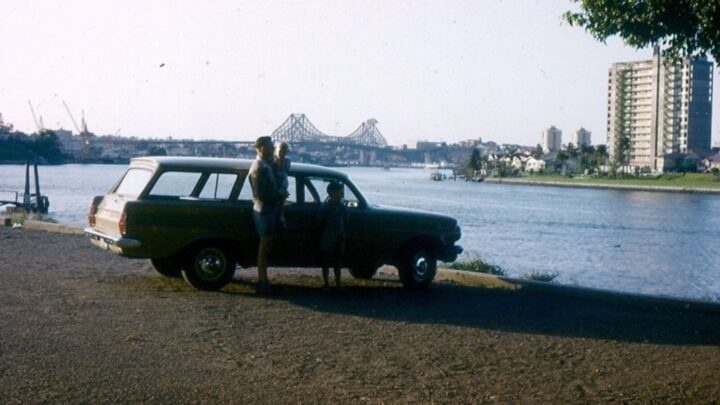 Kate Campbell, the American singer-songwriter, wrote lovingly about a Ford Galaxie 500 that her family had when she was growing up: “She had a red vinyl interior that burned my legs on summer afternoons”. Her song is quite nostalgic and summons up images for me of the 64 Holden EH station wagon we used to have, albeit with a brown vinyl interior – still burnt my legs though, even through the seat covers mum made.

Old cars just have that smell about them, don’t they? Reminders of two-lane highway driving to the coast for the holidays, my brother and I sharing the back seat as best we could. He would often taunt me by walking his fingers just across that imaginary boundary line in the middle, leading to ballistic outbreaks. Now, as a parent, I can fully appreciate the palpable frustration which smoldered in the front seat.

My brother would often be relegated to the back of the station wagon to hold a bucket under our dog Bobby’s face waiting for the inevitable car sickness that the poor fella used to suffer. My brother also suffered really badly from car sickness which, for me, was probably a blessing as he felt too crook to annoy me. Some folk swore by the metal-impregnated rubber strip that hung from the back under the bumper bar. It supposedly earthed the car’s static electricity and so reduced car sickness. I don’t think even hanging my brother off the back bumper bar would have stopped him from throwing up (don’t get me wrong – he really is an awesome brother). I still associate the smell of a certain grass that often grows on the roadsides with these episodes.

Mum had made curtains for the back of the station wagon that we could pull across when sleeping in the back. Naturally, they matched the colour of the car, as did the trailer and the stripe around our fiberglass Franklin caravan. The curtains suffered a traumatic episode one hot, summer holiday, as did the rest of the interior when a watermelon that we had left in the back of the car could no longer contain its level of fermented excitement and exploded. Needless to say, despite a thorough cleaning, driving for a few weeks after that was always with the windows well down.

Mind you, windows were usually down anyway to keep you cool. That little quarter glass in the front seats did sterling service helping to direct the flow, while the plastic weather shields over the two front windows allowed a bit of airflow, even when it was raining. For serious dirt road driving, Dad had a plastic windscreen guard with suction caps to prevent chips. There was also the wire mesh stone shield that vibrated when you drove so you had to get used to seeing through the shimmer.

Dad would check the newspaper for the weekend petrol roster to see where he was able to fill up. There was no such thing as 24/7 petrol stations then and you had to seriously plan ahead if Sunday or holiday drives were in the diary. During the petrol shortage in the early ’70s, we had to put a locking fuel cap on the car to slow down the siphoners. The Shell maps were kept in the push-button glove box which was made of metal so you could put magnets on it. I still like a hard copy map to give me the big picture of where we are and where we are going … SatNav just doesn’t do it all.

Other quirky things that today’s cars wouldn’t have anywhere near them are the dip switch for high beam, the hand brake with the spring that was pulled from under the dashboard, the  ‘three in the tree’ gears, the metal sun shield across the top of the windscreen, and having two different keys – one to open the car and the other to start it. While there have been amazing developments with car safety and ingenuity, car manufacturers, trying to give their latest models the edge,  just seem to be trying to invent something new that we can’t possibly do without – really useful useless items that require you to actually read the manual to find out what they do and how to use them.

I’m super happy just getting from A to B in a reliable, comfortable car and I must say that air conditioning is one upgrade from the EH that I really appreciate (along with the lack of eau de watermelon fermentée).

To (kind of) quote Kate Campbell, “No road was too long No mountain too steep, for me and my EH Holden station wagon”.

To read more nostalgia articles from Pam Van Der Kooy, head here. Or you can find her brilliant nostalgia book Stuff We Had in the 50s and 60s here.