‘I remember the excitement of television, but those days are long gone’ 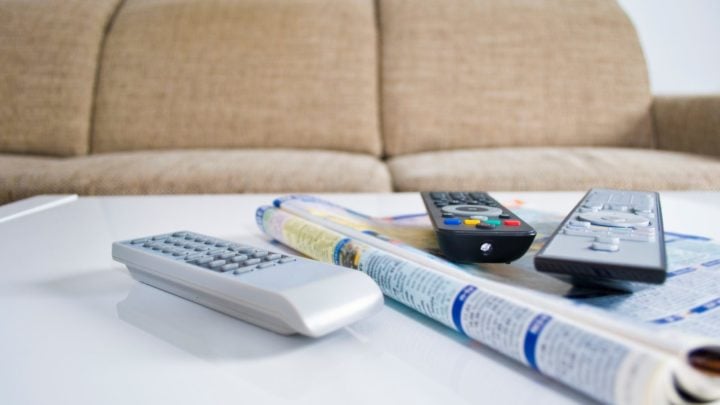 What's on the box? Not much! Source: Getty Images

One Sunday afternoon recently, I remembered the days when you’d get the television guide in the paper and you’d flick through to see what the Sunday night movie would be. There’s no such luck these days because it no longer exists!

Sundays, at least in our household, were a day for bacon and egg breakfasts and dressing in our finery and going to church. We’d have lamb for lunch with the works. (Chicken was only ever eaten at Christmas time in our family because it was too expensive.) Then we’d finish the day watching The Black and White Minstrel Show. The latter might be frowned upon today, but back then it made up a good day.

As I got older the Sunday night movie was exciting, something to look forward to. Now we have reality television, one show after another. It’s awful! Cooking shows where no one ties their hair up or wears gloves when preparing the food. As well as the television shows designed to find you a husband or wife. Where will it all end?

My children tell me I should get Netflix or another such service. What’s the point? I wish our free-to-air television networks would stop showing re-runs and reality shows and give us something to enjoy. Don Lane, Dave Allen and so many more were great for giving us a laugh.

From too many ads, to no longer bleeping out the profanities, television has really changed over the years and I can’t say it’s for the better. I’ve turned it off, gone away from it for a time, returning in the hope there will be something different, only to be disappointed. I might be getting older, but I’m not yet senile.

In recent years I’ve found myself enjoying shows such as The Good Karma Hospital (ABC), Indian Summers (ABC), The Durrells (Channel 7) and Doc Martin. I love these shows and wish there were more of them. I just start to get into watching and then ‘That was the season final of…’. Oh well, it looks like we’re back to watching repeats again. I guess this one will be okay, it’s only dated 2006!

Do you watch television? What are you watching?