‘An Australian dream: There’s much inspiration to be found in Ash Barty’s incredible win’ 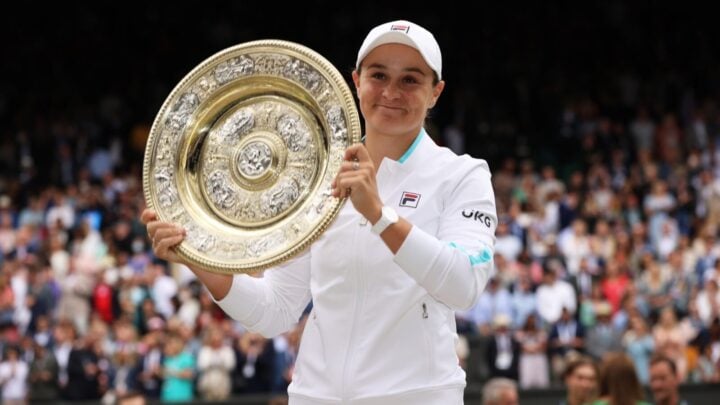 Ash Barty winning Wimbledon was not just realising a personal dream being achieved, Andris says it's also one for Australians as a whole. Source: Getty Images

Giving up has never been an option for Ashleigh Barty. Having beaten the brilliant Angelique Kerber in the semi-final, Barty was not going to be a wilting flower, faced with her last hurdle in the final to the Wimbledon crown.

She knew she had to come out with all guns blazing against Karolína Plíšková’s powerful serving game.

It was indeed a perfect first game.

Barty served first, which I feel gave her the opportunity, should her first serves win her the first game, to make her opponent try to catch up with her, when Plíšková’s service game followed.

Barty’s first love-game was so one-sidedly brilliant, that her opponent failed to deliver that much-feared first serve. Barty raced away to an unbeatable lead and won the first set comfortably.

Then came the second set where Barty was having her championship point, but she could not convert and she eventually lost in a tiebreak.

The gods weren’t smiling on her then: not one, but two net balls from Plíšková ended up on Barty’s side to ensure a lucky victory for the Czech tennis player. Yet, Barty isn’t one to  allow the game to be dictated by luck. She put the loss behind her, reset, and defeated Plíšková convincingly in the third set, after she broke her in the second game, she never let her break back again.

When Ash Barty fulfilled her childhood dream and won the Wimbledon crown, her reaction to victory spoke volumes about her character. She did not pump the air with aggression, or even jump up and down; rather she crouched down in relieved and grateful humility. Then she gave her opponent a warm and sympathetic hug over the net.
However, I feel the most revealing moment about Barty’s character and inner struggle came in a moment we, the curious public, were not supposed to see.

It was after she was paraded through every nook and cranny of Wimbledon, from all the official presentations, running around the court and climbing into the area of her team and hugging them each individually, to chats with royalty and other dignitaries, and holding up her trophy to the outside crowd from the balcony of the first floor of the Wimbledon club.

The camera kept following her further, to somewhere that should have stayed her private space. After all the public displays of celebration paused, she was back in the corridor with her team once again.

There Barty could finally let go. There was a respectful silence among her whole team and at last Barty could cry; let the Atlas roll off her shoulder. That was the extraordinary burden of inner and outer expectation on her to fulfil her childhood dream, to match Evonne Goolagong Cawley’s precedence from 50 years earlier: claiming the English crown by an Australian Aboriginal woman.

To me, those were tears of unbelievable relief, triumph and joy over this extraordinary achievement.

What followed was equally precious and moving: she sank into the caring embrace of her partner Garry Kissick, who was there totally for her, holding her ever so gently to his heart. And Barty’s beloved and ever loyal coach, Craig Tyzzer, stood by her through all this with an eventually fatherly squeeze on her shoulder, reassuring her without words: ‘Yes Ashleigh, this is real!’

I doubt, there was a dry eye among the team, or many watching the match on television screens across the world.

In that moment, it was not only Barty’s dream that was fulfilled. I feel it was also a glimpse of the fulfilment of what Stan Grant referred to in his book and documentary about The Australian Dream.

I feel Barty’s victory gave us yet another taste of what it takes to fulfil the Australian dream: to recognise and embrace First Nations Australians truly as our equal brothers and sisters. It happened with Goolagong Cawley, with Cathy Freeman and with Adam Goodes, just to name a few. They achieved on a world stage for all of us to see, if we have eyes and hearts, how proud they can make us feel that they are so quintessentially and preciously foundational to the Australian identity and dream.