A sea change for Australia 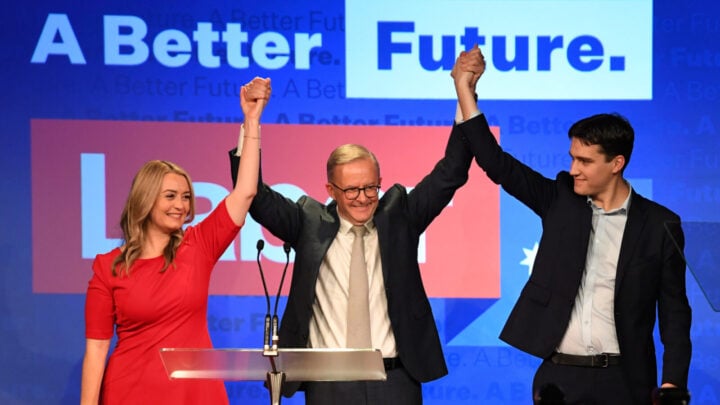 Australia voted for a change after 9 years under a Liberal government. Source: Getty

Australia’s voters have delivered a Labor government. Some will see this as a sea change, a fundamental shift in the electoral demographics. Others may cautiously view the result of Saturday’s election – when it finally becomes clear in all its detail, which is unlikely to be this week – as simply another of the cyclical events that periodically sweep away the stagnant tide pools of incumbency. The cynical, and they are many, and those who study history, who are considerably fewer, may prefer the latter analysis.

To do so would be churlish. It was clear early in the count on Saturday night that the coalition had lost office. Scott Morrison was quick to concede and to do the usual fall-on-my-sword thing. He was more gracious in defeat than was generally his custom in power, in bulldozer mode, and that is to his credit. Anthony Albanese promised to govern for all Australians – that promissory note is a standard clause in victory speeches – and is sincere in this. He has little option anyway. The new parliamentary landscape will ensure he keeps to that path in the new legislature, whether Labor achieves a majority in the House of Representatives or not. The betting is that it will. There were 12 seats still in doubt on Monday and, on the counting, the ALP is practically certain to end up the winner in four more at least, as it inches ahead in the continuing counts towards the magic number 76 and potentially 78.

An interim ministry has been sworn in. This was necessary because Australia’s prime minister and foreign minister are required at the Quad meeting in Tokyo, where Albanese and Senator Penny Wong headed yesterday. Several sets of eyes will be fixed on them, not only those of the U.S., Japan, and India, keen to detect any shifts (or signs of same) in the new administration’s foreign and defence policies. There won’t be a radical change, but in high diplomacy, nuance is everything.

On the domestic front, Labor’s embarrassing own goal in the seat of Fowler – where, as widely expected, party luminary Kristina Keneally’s parachute failed to open, handing the seat deservedly to the popular independent candidate – may create some further intra-party distemper. Fractious factionalism is never a good idea.

That’s something the defeated Liberals would be sensible to consider as they clear out their desks and set out on their path through the thickets of opposition. It’s clear that climate and corruption denial angered enough voters to significantly reduce the party’s primary vote. Liberal moderates were the victims of these political miscalculations. Suggestions from the Murdoch empire and others that the party should now break sharply to the right and occupy the political elevation they feel is there for the taking, are misguided. The battleground in Australian politics remains the centre, not the fringe. It may be difficult to carve out a definably different message in the middle of that melee, but that’s the game.

The rise of an independent bloc has now been cemented by the electorate. The increased Green’s presence cannot be ignored, nor should it. It may be too early to declare that Australian politics is now a whole new ball game (certainly the Greens need to curb their enthusiasms in that regard) but it’s plain that a significant change has been made.

It’s the Liberals who in this instance have lost the plot, or at least their compass. That’s not a good thing. They’ll have a new leader, almost certainly Queenslander Peter Dutton. He will have an opportunity, if he chooses to take it, to show that he has a broader vision and capacity than he has demonstrated in his ministerial portfolios in the past two governments.

Some moderate Liberals suggest he’s not as conservative as he looks, and he’s certainly less religious than his former boss. We’ll see if that proves correct. Whoever is the Liberal leader will have to deal with the knuckle dusters on the party’s right. The party’s place in the Australian political landscape remains economic rationalism and social liberalism. Denialism is neither a feasible policy nor an electable proposition. Clive Palmer’s wasted millions in this election campaign demonstrate that in spades. But opposition leadership is a difficult place, especially for freshman occupants of that position after an election loss. It is character-forming, among many other things.

We now have a breathing space while planetary and political alignments adjust. That’s welcome after a six-week campaign of basic shadow boxing and the frankly dysfunctional year that preceded it. Any new government deserves time to settle itself in. We know what Labor’s policy parameters are, even if we are awaiting the detailed plan. Even the ALP’s most intractable opponents in politics and the media know that instant economic and political action isn’t on the radar. It’s time for a chill pill.