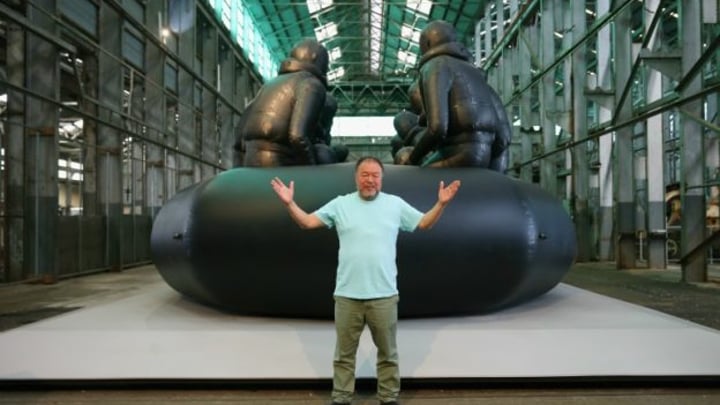 Attention Tony Abbott and Peter Dutton! Your meticulously vigilant policy of turning back the boats has been challenged!

A 60m rubber boat crammed with refugees made it to Australia and landed in the heart of the Sydney Harbour, on Cockatoo Island, right under the nose of nearby navy boats, and not a single border protection agent is in sight. On the contrary, thousands of visitors are expected to flock to the island to pay tribute to the virtual boat people on board of a real refugee boat. Their ‘people smuggler’, is the most famous Chinese activist-artist, Ai Weiwei.

Not only is he not arrested, he has been aided and abetted in his scheme by the prestigious Biennale Art Festival.

Ai Weiwei was also given the keynote address to launch the 2018 Sydney Biennale in a sold out event in the Sydney Opera House on March 15.

All this is highly embarrassing to our Federal Government as Australia has the most ruthless ‘turn the boats back’ policy towards refugees of all the wealthy nations.

Weiwei presents the boat people in the context of 65 million plus faceless and often exploited people forcibly uprooted worldwide; the greatest humanitarian crisis in history since World War II. He reveals their faces and harrowing plights as individual human beings in his documentary film The Human Flow. WeiWei personally introduced the film at its Biennale launch presentation at the Opera House.

His film and his real refugee boat exhibit, right under our nose, in the heart of our magnificent Sydney Harbour, can only prick our conscience in this ‘lucky country’ and make us question our own share of the responsibility for the humanitarian crisis behind the refugee tragedy.

“Being a refugee is the most pervasive kind of cruelty that can be exercised against a human being. You are forcibly robbing a human being of all aspects that would make life not only tolerable but also meaningful in any way,” the film says. “If children grow up without any hope for the future, without any prospects for the future, without any sense of their being able to make something out of their lives, then they will become vulnerable to all sorts of exploitation, including radicalisation.”

Instead of spending a staggering $400,000 per person on keeping the boat people in offshore detention, Australia should, as Scott Higgins points out:

“Work with transit countries, such as Malaysia and Indonesia, to establish well-resourced centres that would allow rapid assessment of refugee claims and access to health and welfare benefits and agree to resettle all those found to be refugees. This would create a viable pathway to refugees, reduce extended waiting periods for resettlement and therefore reduce the incentive to board unseaworthy boats.”

Australia presently has the worst foreign aid record of all developed nations towards impoverished countries.

We witness the human journey of millions of displaced men, women and children across 23 countries, 40 camps, with a sample of 600 people interviewed. We see their similarity to us and that really, any one of us could be amongst them if we were made homeless through tragedies beyond our direct personal control. The resurgence of the ‘win-lose’ self-centred nationalism to which an increasing number of nations are drifting to, results in the long run, in a ‘lose-lose’ outcome to the whole world.

We may turn the boats back, but if we in fact are all in the same boat globally, we are turning back on ourselves too, to a growing distrust, disunity and thus towards the disintegration of humanity.

What do you think of Australia’s position on refugees? Share your thoughts with us.