‘The strength of Australia’: 2022 Australian of the Year Awards 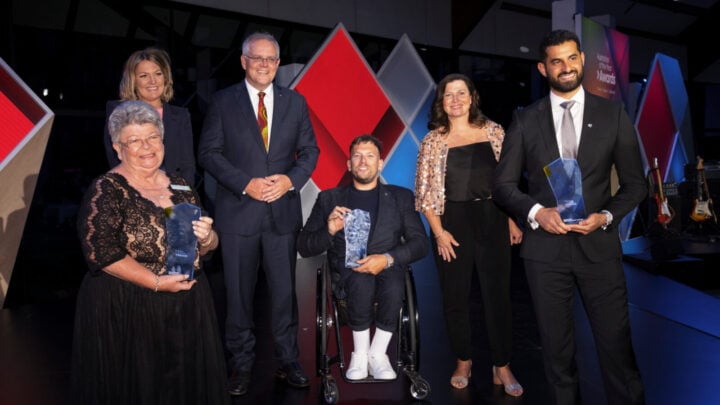 The Australian of the Year Awards have been and gone for another year, with a new cohort of incredible Australians taking out the four major awards, pictured here with Prime Minister Scott Morrison, and wife, Jenny. Source: Getty

The 2022 Australian of the Year Awards were celebrated last night, January 25, in a lavish event at The National Arboretum in Canberra.

Prime Minister Scott Morrison made a short address to the audience before the ceremony, in one part saying:

“For me, this ceremony is about more than an award on a mantelpiece, as I’m sure it is for anyone here. It’s a touchstone of what this country is about. What makes us tick. Why we keep going, as we do.

“This is what these finalists here embody. So I congratulate all our finalists tonight. But to each of you, most of all, I just want to say a humble thank you.”

For Local Hero, the nominees were:

The recipient of the Local Hero award was Shanna Whan, for her work in changing the conversation about alcohol consumption, in rural Australia. Her not-for-profit perr support group Sober in the Country, spread the message that it is “always okay to say no” to alcohol.

“Alcohol use is the silent pandemic we are not discussing, and it’s a pandemic that is exploding exponentially with Covid-19 no matter your postcode.”

For Young Australian of the Year, the nominees were:

Young Australian of the Year award recipient Daniel Nour, shared his frustration with the audience, that Australia’s basic standard of medical care for those experiencing homelessness is far worse than the standard other Australians receive. So, in 2020, Nour started Street Side Medics, a not-for-profit mobile GP clinic.

Nour shared: “As Australians, it’s our responsibility to advocate for those who seem to have lost their voice and to rise up to the occasion, even when we question our own ability to do so.”

For Senior Australian of the Year, the nominees were:

The recipient, Valmai ‘Val’ Dempsey, shared her dream with the crowd, saying “Imagine this — don’t get too scared — every learner driver in Australia undertaking compulsory first aid training as they currently do in 11 European countries.”

“No other single measure has the potential to educate a generation to save lives like bystander first aid does.”

“As a nation, we can rethink our approach to those critical minutes between life and death at a road accident. To make members of our community part of the solution.”

And for Australian of the Year, the nominees were:

Alcott began his speech with a joke, saying “I think standing ovations are one of the most ironic things in the world, by the way. But I’ll take them, without a doubt.”

Getting more serious, Alcott thanked those in his life, and also encouraged all others out there who were “like him” to live their best, fullest lives, saying:

“I’ve been in a wheelchair my whole life … I’ve known nothing but having a disability.”

“And whenever I turned on the TV, or the radio or the newspaper, I never saw anybody like me.

“And whenever I did, it was a road safety ad where someone drink drives, has a car accident and what’s the next scene? Someone like me, but in tears because their life was over.

“I thought to myself, ‘That’s not my life’, but I believed that was going to be my life. But I’m so lucky that I had one of the best families, some of the best friends, my beautiful partner and my whole team who told me that I was worthy.

“I’m honestly so honoured to be up here and it’s because of them and everybody in my life that I sit here as a proud man with a disability tonight.”

Alcott also noted in his speech, that he was very humbled to receive the award after 2021 Australian of the Year recipient Grace Tame. Describing Tame’s fierce dedication to her fight for survivors of sexual assault, particularly, those who were abused in institutional settings.

Alcott said of Tame “Tamey, you are fierce and I love it.”

“You have done so much for your cause and if I could be one-eighth of the Australian of the Year that you were, I think I’ve done my job.

“When I won the US Open I skoaled a beer out of my trophy and you said, ‘If I got to pass the mantle over to this guy I’d be honoured. But we have to skoal the beer together’. Give me a couple of days and then we can do it. Not just yet.”

Alcott, despite winning Australian of the Year, and receiving his award in Canberra on January 25, is also playing in the Australian Open tennis tournament currently being held in Melbourne, Victoria. Alcott will return to Melbourne to play Sam Schroder of the Netherlands in the Grand final of the Men’s Quad Wheelchair Singles on Thursday, January 27.