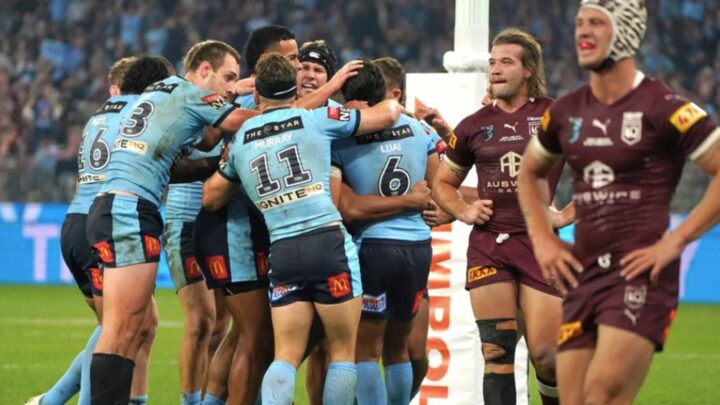 Ticket scam have become a common issue since the rise of classified sites. Source: Instagram @optusstadium

State of Origin fans on the hunt for tickets to the highly anticipated final game have been warned not to get too desperate in their search or they may fall victim to a new scam doing the rounds.

Queensland Police issued the warning as the final game in the three-part series, which is set to take place in Brisbane on July 13, is expected to be a major target for scammers.

“They are preying on our vulnerabilities, in this case, it’s people desperate to get Origin tickets,” he said.
“We’ve seen examples of people losing up to $10,000 trying to buy tickets.”
While Queensland legislation recognises that there are some people who genuinely purchase a ticket but find they are no longer able to use them, tickets can only be resold at a 10 per cent margin- allowing fans who are no longer able to attend to recoup the ticket price and any cost associated.

Newman provided some advice to consumers on how to spot a fake seller.

“If they can’t physically show the tickets or provide bank account details in the person’s same name- they’re some red flags to be on the lookout for,” he said.

State of Origin ticket scams are unfortunately nothing new with many falling victim to similar scams in the past.

Back in 2017, a family from Roma drove five hours to watch the State of Origin decider, only to be turned away when they discovered their tickets were fake.

The mother-of-three was given four platinum tickets from her parents as a present for their grandchildren’s birthday.

The grandparents explained they had purchased the tickets from an online classified site for over $1000 from a man who claimed he no longer needed them, completely unaware of the scam.

The man accused of selling the fraudulent tickets had also claimed he too was a victim of a scam, saying his ID was stolen and was being used to sell various fake tickets.

“It’s making my life horrible,” he said at the time.

Online ticket scams have become a common issue since the rise of classified sites like Gumtree. Tickets nowadays are easily transferable between people, allowing scammers to use the tickets themselves before reselling them to their victims.

A representative from Ticketek says they’re already anticipating tickets to sell out but reminds fans that if they miss out they can still visit Ticketek’s online marketplace to find legitimate ticket resells.

Will you be watching the final State of Origin game?