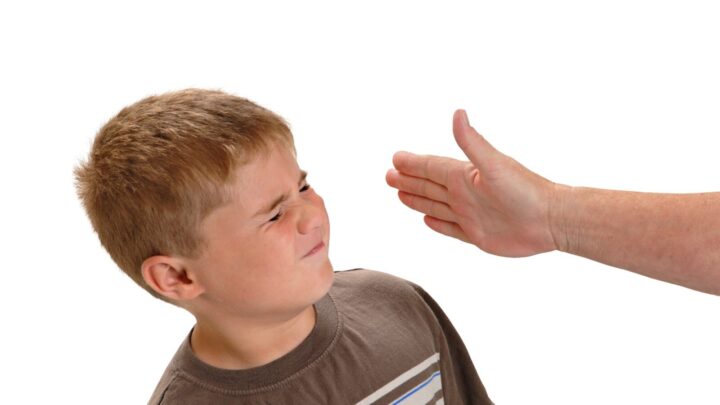 Should parents be allowed to smack their kids? A new parenting series re-ignites the explosive debate. Source: Getty

To smack or not to smack. Emotional scenes have erupted on explosive new parenting series, Parental Guidance, re-igniting the ever-heated debate about spanking children as a method of discipline.

Channel 9’s new series debuted on November 1, pitting 10 sets of Aussie parents with contrasting parenting styles against each other to decide whose approach is “best”. The show is moderated by parenting expert Dr Justin Coulson and Today’s Ally Langdon.

In one side of the ring in the first episode this week were “strict” parents Miriam and Andrew, who believe that dispensing the odd smack is a valid tool in the parenting arsenal.

“A smack quickly communicates [that] there are boundaries, there are consequences, [and] you can’t just do whatever you want,” said Andrew, a Christian minister, and father of three.

Hearing Andrew’s controversial views, other parents on the show were mortified, reacting with horror and slamming smacking as “a big fat no”. One parent even said he felt literally sick.

“I’m just getting a physical reaction to this,” said Yann, who describes his preferred parenting mode as “French nouveau”.

“We make sure that we have gone through the other different tools and tried different ways, and if there is a situation that has that purpose or defiance and we feel that that particular situation that’s the most effective tool, we ask the child to come to us, we don’t chase them around the house, we don’t try to pin them down or hold them, we ask them to come to us and the smack is delivered on the bottom,” she explained.

Both she and Andrew were raised in households where their parents smacked them, the couple confessed, and they did not hold any resentment or bitterness towards their parents because of it.

“I’ve actually felt that that was a fine form of correction and as I’ve reflected upon that in my upbringing, I’ve thought, well that was a positive tool and so I’ve used that for our children,” Andrew appealed to the other parents.

They weren’t buying it.

“We got disciplined as kids and we got smacked with wooden spoons and it certainly didn’t feel like it achieved anything – anything positive anyway, shot back Daniel, a self-described “free-range parent”.

“So for me, absolute deal-breaker,” he said.

Dr Coulson had the final word on the episode about whether it’s time to retire the wooden spoon from the parenting toolbox.

“The research is really clear. Smacking does not serve our children well. It doesn’t help them to grow or develop,” he said.

In Australia, the debate over corporal punishment for children has raged for years; with many decrying the practice as child abuse.  And while the days of being sent to the headmaster’s office for the cane or cuts are long gone, corporal punishment by a parent or carer is still lawful in all Australian states and territories — providing that it’s “reasonable”.

An Australian Talks National Survey from 2019 shows that 47 per cent of Australians believe smacking their kids is an acceptable form of discipline, compared to 38 per cent who disagree.

However, the move to legally ban parents from smacking their kids is gaining momentum around the world. In 2022, Wales will join dozens of countries such as Brazil, South Africa, Scotland, Norway and Austria, when it enacts legislation to make the divisive practice illegal, giving the same protection from assault as adults.

Parental Guidance airs on Channel 9 at 7.30pm on Monday, Tuesday and Wednesday

Do you believe today’s parents are too soft on their children?