‘Our hearts are so broken’: Family of police officer killed in horror crash speak out 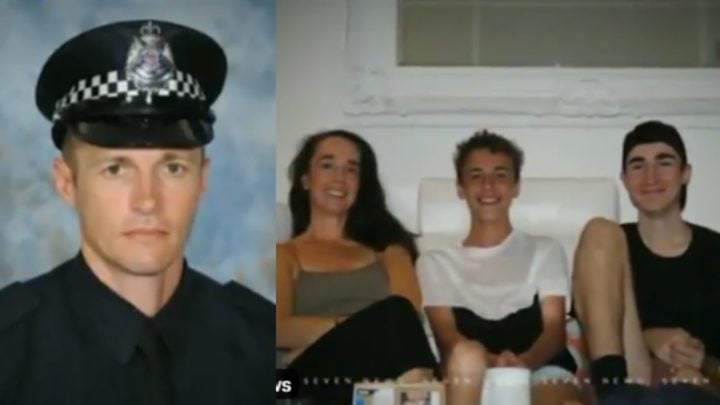 The family of Senior Constable Kevin King, who was killed with three other officers in a tragic crash in Melbourne last week, has released a heartbreaking tribute. His wife Sharron Mackenzie and sons William, James and Henry remembered him as a “big softie who would do anything for absolutely anyone”.

The father-of-three, 50, died alongside Senior Constable Lynette Taylor, Constable Josh Prestney and Constable Glen Humphris when a semi-trailer crashed into them while they were trying to impound a Porsche on Melbourne’s Eastern Freeway last Wednesday.

“Kevin was from a very close-knit family and this is such a devastating shock for all of us,” the family wrote in a statement on Monday. “Our hearts are so broken.”

King’s partner of 35 years said her heart “is in pieces”. “I’m totally devastated. My beautiful man, my life, my rock and my only love for 35 years is gone and life will never be the same.”

His family said working as a police officer was something he was destined to do. “He was searching for a long time for something that had meaning, and we’d often joke that he seemed like a cop even long before he was a cop, it was his nature,” they said.

“He was always methodical, very well-organised, and loved comradery. He loved going to work, it was his home away from home.”

The family extended their condolences to the families of the other officers killed. “We feel great empathy for the families and friends of Joshua, Glen and Lynette who are going through this with us.”

It comes as Melbourne doctor Amanda Sampson, one of the motorists who stopped to help at Wednesday’s crash site, said she wanted the families of the deceased officers to know how many strangers stopped to help.

“I wanted to reassure them that all the officers were surrounded by many people who came to help, many people who were there at the time and tried to support them and give them the help that we could,” she said, according to the ABC. “I wanted the police to be comforted by the fact that they are cared for, and we do love what they do for us and how they help us, and that we say thank you.”

Following the tragic incident, Police Association Victoria released a statement which read: “The Police Association Victoria is shocked and immensely saddened by the deaths of four of our dedicated members, who were killed while protecting the community on the Eastern Freeway this afternoon. We are providing immediate and ongoing support to the colleagues and families of those members.

“This is a brutally sad reminder of the danger police face in the course of their service, every minute of every shift. We mourn their loss, we grieve with their families and colleagues and we will never forget them.”