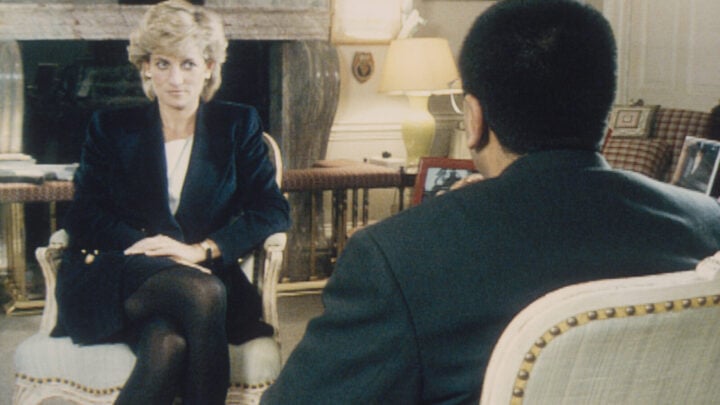 On November 20, 1995, Diana sat down for a confronting yet brutally honest chat with journalist Martin Bashir. Source: Getty.

Princess Diana’s now-infamous BBC interview in which she noted that “there were three of us” in her marriage to Charles, Prince of Wales is back in the spotlight again, and if you’re wondering why, we’ve broken it down for you.

The contents of the interview

On November 20, 1995, Diana, who had been separated from Prince Charles for three years at the time, sat down for a confronting yet brutally honest chat with journalist Martin Bashir. The hour-long interview was first televised in the UK on the BBC’s Panorama and gave viewers an insight to the drama that had been surrounding Diana and her family for years, including Charles’ affair with his now-wife Camilla Parker Bowles and her own affair with military officer James Hewitt. The TV interview marked the first ever solo interview for Diana and happened just nine months before her divorce.

The BBC is currently investigating whether Diana was tricked into her tell-all interview over allegations about the conduct of Bashir, who was originally cleared of any wrongdoing back in 1996. According to new allegations from Diana’s brother, Earl Charles Spencer, Bashir — who hasn’t commented on the investigation, as he’s recovering from Covid-19 — exploited both him and Diana by faking bank statements to convince them that someone in the royal’s inner circle was selling information about her relationship with Prince Charles to the press.

Charles Spencer tweeted earlier this month: “Many people are, quite understandably, asking why I’ve waited till now to come forward with the truth about how the @BBCPanorama with my sister came about. While I knew that Martin Bashir used fake bank statements and other dishonesty to get my sister to do the interview what I only found out 2 weeks ago, thanks to journalist Andy Webb’s persistent use of the Freedom of Information Act, is that the BBC also knew. Not only knew about it, but that they covered it up.”

Meanwhile, Diana’s eldest son Prince William has welcomed the BBC’s decision to look into how the broadcasting company secured an interview with his late mother, revealing the investigation was a “step in the right direction”.

In a statement, released by Kensington Palace on Thursday, he said: “The independent investigation is a step in the right direction. It should help establish the truth behind the actions that led to the Panorama interview and subsequent decisions taken by those in the BBC at the time.”

Diana’s younger son, Prince Harry, who recently quit the royal family and moved to California with his wife Meghan and baby son Archie, has remained silent on the matter, however a source close to the prince has revealed he’s “getting regular updates”, the ABC reports.

Why the interview rocked Buckingham Palace

Princess Diana’s candid interview dropped bombshell after bombshell, so it’s no surprise the Queen, who’s a big believer in keeping personal matters private, was not impressed. In fact, after the interview aired, the monarch reportedly sent a letter to both Charles and Diana advising them to divorce.

One of the hot topics Diana discussed was the toll that marrying into the royal family took on her and her mental health.

The mother-of-two detailed how she felt misunderstood and that there were days where she didn’t want to get out of bed.

She said the family didn’t know how to deal with it: “Well, maybe I was the first person ever to be in this family who ever had a depression or was ever openly tearful. And obviously that was daunting, because if you’ve never seen it before how do you support it?”

Diana also suggested that Prince Charles used her depression against her as a negative label throughout their rocky relationship. Bashir questioned whether Camilla had been a factor in the breakdown of Diana’s marriage to Charles.

“Well, there were three of us in this marriage, so it was a bit crowded,” Diana said frankly.

The line became famous and it’s arguably one of the many reasons why the public has never embraced Camilla or warmed to her like they did Diana.

What are your thoughts on this? Do you remember watching this on TV?