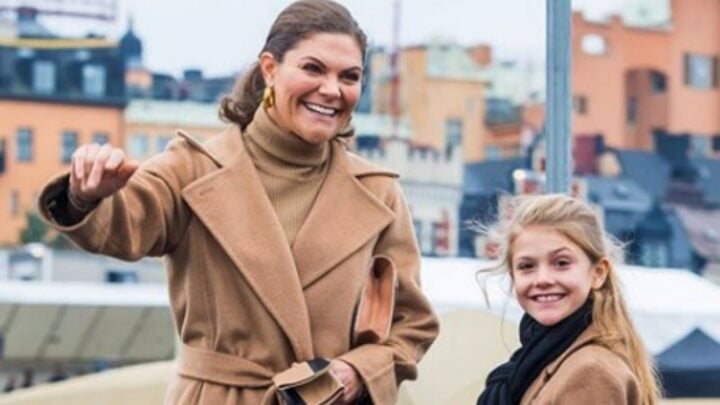 Princess Victoria and Princess Estelle pictured together on a royal engagement. Source: Kungahuset/Instagram.

Princess Estelle of Sweden, eight, joined her mother Crown Princess Victoria, 43, in a rare public appearance, and royal fans couldn’t get over how much the young royal has grown.

The young princess donned a brown coat just like her mother’s as they joined King Carl Gustaf, 74, to open up a new bridge in Stockholm. Estelle teamed her outfit with black slacks, a matching scarf and boots, while Victoria teamed her outfit with a nude-coloured turtle neck, matching pants and a pair of nude heels, while she wore her hair in a slick ponytail and accessorised with gold hoop earrings.

The Swedish royal family shared several images from the engagement on social media, explaining: “Earlier today, the King, in the presence of the Crown Princess and Princess Estelle, inaugurated the new Slussbron, which connects Stadsholmen (Old Town) and Södermalm in Stockholm.

“In his inaugural address, the King said: ‘The new bridge is an important milestone, in the Slussen project and in Stockholm’s history. And when it now opens to traffic, it links not only north and south, but also today’s and tomorrow’s Stockholm. May it be of use and joy to many generations of residents of the capital and visitors.’
⠀⠀⠀⠀⠀⠀⠀⠀
“The lock-in Stockholm is an important hub in the capital and a major redevelopment of the area is currently underway. The construction project is expected to be completed in 2025.”

Many royal fans were quick to comment on the photos of Estelle, with one writing: “Estelle, what a true beauty.” Another added: “Oh how big and nice the girl has become!”

While a third wrote: “Princess Estelle is so cute!” And another added: “Great pictures! The king looks really spunky and Estelle will be a brilliant queen one day!”

It comes just a few months after the Swedish royal family released new photographs of Princess Victoria and her doting husband Prince Daniel to mark their tenth wedding anniversary. Taken in Gustav III’s pavilion, close to Victoria and Daniel’s home at Haga Palace, the royals were seen looking very much in love in the series of images taken by professional photographer Elisabeth Toll.

In one photo, the mother-of-two wore a beautiful midnight-blue tulle gown featuring a sheer bodice, accessorising with the Baden Fringe Tiara, as she poses alongside her husband, who donned a smart tuxedo, in the stunning grounds of the pavilion.

Are you a fan of the Swedish royals?