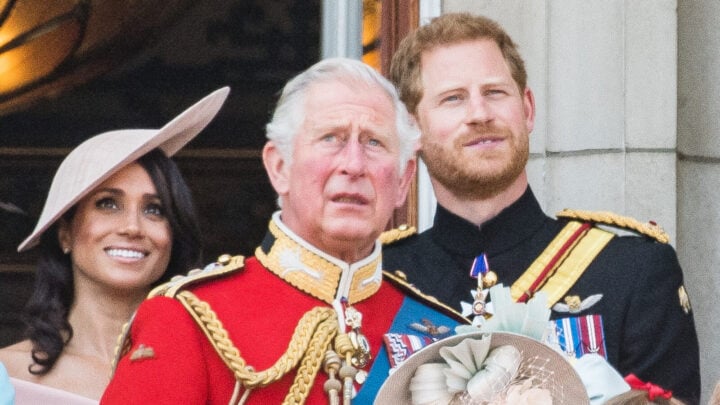 Prince Harry didn't hold back in his latest interview, where he took another dig at his father, Prince Charles. Source: Getty

Prince Harry has accused his father of inflicting “genetic pain” on him, and blamed the Queen and Prince Philip for enforcing a cycle of poor parenting decisions in the royal family.

Harry made the extraordinary comments in an interview with popular US podcast Armchair Expert, published on Thursday, and said he moved to the US to “break the cycle” of “suffering” he endured as a child.

During the 90-minute interview, Harry described royal life as a “mixture between The Truman Show and being in a zoo” and claimed Prince Charles’s parenting style, which Harry clearly has issue with, was a result of the pain he experienced in his own childhood.

“It’s a lot of genetic pain and suffering that gets passed on anyway, so we as parents should be doing the most we can to try and say, ‘You know what, that happened to me, I’m going to make sure that doesn’t happen to you’.

“I never saw it, I never knew about it, and then suddenly I started to piece it together and go ‘OK, so this is where he went to school, this is what happened, I know this about his life, I also know that is connected to his parents, so that means he’s treated me the way he was treated, so how can I change that for my own kids’?

“And here I am, I moved my whole family to the US, that wasn’t the plan but sometimes you’ve got make decisions and put your family first and put your mental health first.”

Harry also opened up about how he felt about his royal status growing up, and how he felt trapped while undertaking royal duties.

“Grin and bear it, get on with it.

The prince also touched on the first time he met up with Meghan, saying, “the first time that Meghan and I met up for her to come and stay with me, we met up in a supermarket in London pretending that we didn’t know each other. So we texted each other from the other side of the aisle, people looking at me and giving me all these weird looks, coming up to say ‘hi’.

“And I was like, texting. It’s like, ‘Is this the right one?’ She’s like, ‘No, you want parchment paper.’ I’m like, ‘Okay, where’s the parchment paper?’ I had baseball cap on, looking down at the floor, trying to stay incognito. It’s amazing how much chewing gum you see, it’s a mess!”

Harry appeared on the podcast to promote his new mental health series with Oprah Winfrey, The Me You Can’t See, which is set to premier on Apple TV+ on May 21.

What are your thoughts on Harry's latest comments?