As Prince George turns 6, a look at all his official birthday photos so far 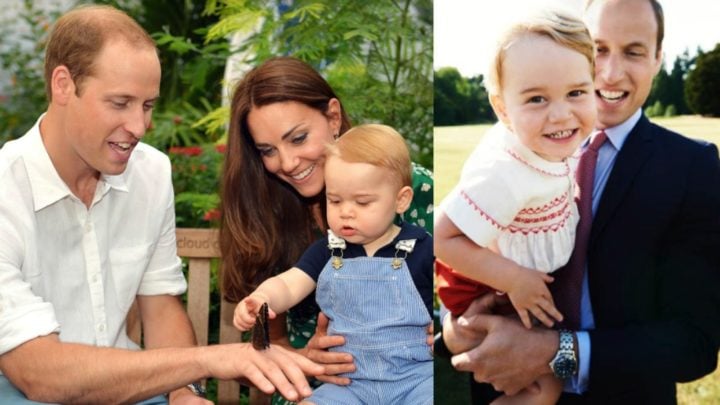 Prince George has been pictured for each of his birthdays so far. Source: Getty (left) and Twitter/Kensington Palace (right).

Prince William and Catherine started a very popular and moving tradition when their eldest son Prince George was born, and they’ve done the same for each of his two siblings since – releasing new and beautiful photographs to mark their birthdays.

And as George turns six on Monday, royal supporters are eagerly waiting to see whether there will be more official photos to look forward to on his big day.

From snaps of the young prince as a baby in his mother’s arms, right through to him cheekily smiling at the camera and playing with the family dog, the royals have revealed a little more of his life behind closed doors in each of the photos so far.

Here’s a look at some of the most memorable birthday snaps:

The Duke and Duchess of Cambridge truly kicked things off in style for their son’s first birthday, as they released a series of photos from a fun photoshoot during a visit to the Natural History museum’s butterfly exhibit.

George was seen running around on his own dressed in striped dungarees and little shoes, before pointing up at the butterflies above him.

Meanwhile, more photos showed him cuddling up to his proud parents as they beamed in the candid snaps, all taking in the colourful insects around them.

Just a year later, Kensington Palace released a beautiful photo of a cheeky Prince George smiling in his father’s arms, as he leaned into the camera for the perfect shot.

Thank you to the Grenadier Guards for playing ‘Happy Birthday’ at today’s Guard Change! #HappyBirthdayPrinceGeorgehttps://t.co/Gkcal0kShn

Wearing small red shorts and a white top, he appeared a complete natural in the snap as they stood together outside their home. To celebrate the big day, the Grenadier Guards also stopped their usual routine to play ‘Happy Birthday’ in the young prince’s honour.

Can’t believe it’s been three years already! The Duke and Duchess would like to thank everyone for all the lovely messages they have received for Prince George's 3rd birthday, and are delighted to share four new photographs of Prince George to mark his third birthday, taken by photographer Matt Porteous at their home in Norfolk in mid-July.

For George’s third birthday, William and Catherine really treated royal fans as they once again released a series of photos from a photoshoot – this time showing a glimpse of their life behind closed doors.

The Duke and Duchess of Cambridge are delighted to share four new photographs of Prince George to mark his third birthday. Photographer Matt Porteous said: "I really enjoyed the opportunity to take these photographs of Prince George. It was a very relaxed and enjoyable atmosphere. I'm honoured that they have decided to share these images with the public to mark his third birthday."

The snaps, taken at the family’s home at Amner Hall, in Norfolk, showed George playing with their dog Lupo on a picnic blanket while feeding him some of his own ice cream, apparently oblivious to what’s going on around him.

The Duke and Duchess of Cambridge are delighted to share four new photographs of Prince George to mark his third birthday. They were taken by photographer Matt Porteous at their home in Norfolk in mid-July. A spokesman for Kensington Palace said: "The Duke and Duchess hope that people will enjoy seeing these new photographs. They would like to thank everyone for all the lovely messages they have received as Prince George celebrates his third birthday."

Meanwhile, more photos featured him sitting on a rope swing outdoors – just like any other child his age and without any of the royal splendour many would expect to see – before more showed him in another outfit laughing as he walked through the countryside.

Scaling things back and releasing just one special photo on his fourth birthday, parents William and Catherine shared a portrait of George beaming straight at the camera dressed in a striped shirt – looking incredibly grown up compared to his previous snaps.

The official picture was taken at Kensington Palace in London, where the family live, by royal photographer Chris Jackson.

For his most recent birthday last year, Prince George was pictured in another smiling portrait – this time in the garden of Clarence House in London.

He was seen laughing up at the camera with his hands behind his back, wearing some navy shorts and a white shirt.

Are you a royal fan? Are you looking forward to seeing the photos the royals release of Prince George?