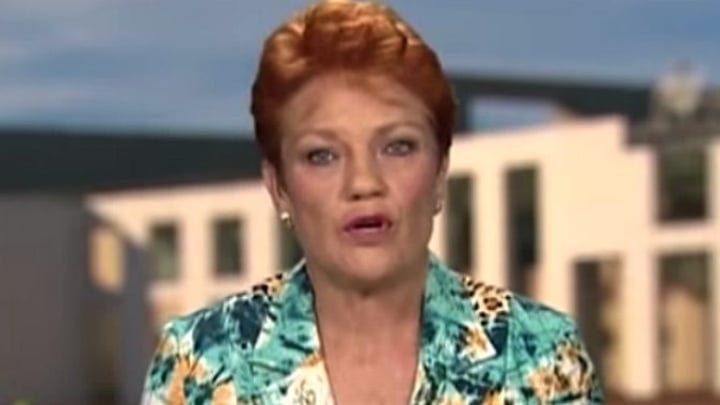 Pauline Hanson has made no secret of the fact that she wants to see facial veils, such as the burqa, banned across Australia, and the controversial pollie has once again renewed her vow to see them outlawed in public areas, slamming feminists in parliament who disagree with her views as “pathetic”.

The 64-year-old Queensland Senator announced in a Facebook post that she will be introducing a petition into the Senate on Thursday, which she claims has been signed by more than 23,000 people who support her calls to ban the burqa and niqab, citing issues with security and facial recognition.

The One Nation leader then discussed the topic on Channel Nine’s Today show on Thursday morning telling presenter Karl Stefanovic that MPs who stand up for women’s rights but support the burqa are “pathetic”.

“Here they are standing up for women’s rights, but there are a lot of women who are forced to wear the burqa by their male counterparts,” she said. “They’ve actually said it in programmes that I watch that they want to get rid of the burqa, or other women who have moved away from the ideology of Islam.

Hanson announced the news in a rant on her Pauline Hanson’s Please Explain Facebook page, and went on to say that she will force her colleagues in the senate to vote on whether facial veils “have a place in Western Society”.

“Big day today,” she wrote. “I’m submitting a petition to the Senate that calls for a ban on the burqa and niqab. It has been signed by over 23,000 Australians. So many Australians are passionate about this issue and it is about time they had their voices heard.

‘I will also be forcing the Senate to vote on whether they believe full-face coverings such as the burqa and niqab have any place in western society and calling for the Senate to immediately ban these types of coving in public places where identification is necessary and security is an issue.”

Earlier this week, Australian Conservatives leader Cory Bernardi made headlines after he issued a similar call, when he tabled a bill which would see full facial veils, such as the burqa and niqab, banned from all Commonwealth-owned land and buildings.

If the bill made it into law this could mean that they would not be permitted across the majority of the ACT and Northern Territory, with Bernardi telling The Daily Telegraph: “It is a direct challenge to our cultural norms and our societal expectations. It’s a way of one group isolating themselves.

What do you think? Should people, regardless of religion, be free to wear what they choose?