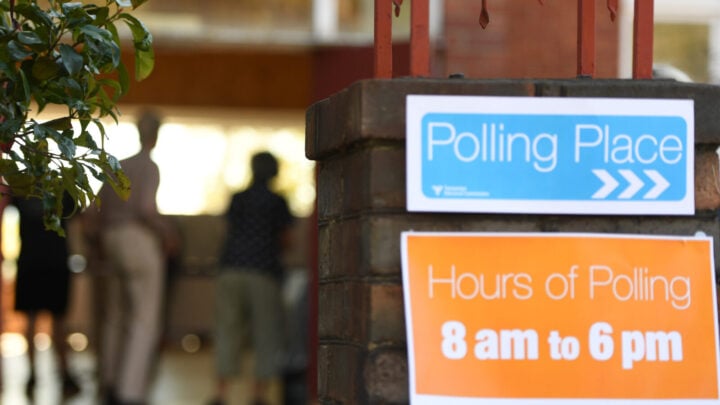 This seasoned blogger gives a run down on the election campaigns. Source: Getty

The Easter weekend was a campaign quiet spot. Every election campaign should have at least one buzz-free zone. This one’s got two, courtesy of ANZAC Day. A bonus! Thank goodness for small mercies. Though we always knew the big guns would recommence rattling the windows and the china as soon as the Easter bunny had hopped off. It wasn’t quite a ceasefire, but it did provide some thinking space. That’s needed on either side of the main political divide. It hasn’t quite been all gaffes and stumbles, though some of the more breathless media mastheads and their television comrades apparently think so. And there’s still a bit over five weeks to go before the votes are counted. It would be nice to hear about some new policy and see evidence of real vision in the campaign to-and-fro.

The first leaders’ debate, in Brisbane on Wednesday evening, managed to flesh out some of the policy. Prime Minister Scott Morrison blinded us all with a blizzard of facts – some worth checking – and Opposition Leader Anthony Albanese gave a good account of both himself and Labor policy. The debate was screened on Sky TV in a Q&A setting, with questions from among the 100 selected undecided voters present. They scored Albanese 40, Morrison 35, and 25 votes remained undecided. There’s a way to go.

The election campaign will pick up some pace now. It probably needs to, with close attention to the risk of pratfalls. Greens MP Adam Bandt gave every politician a lesson last week with his brilliant shoo-off of a gotcha question from a journalist: “Google it, mate!” The journalist in Bandt’s sights at the National Press Club in Canberra was Ronald Mizen from the Australian Financial Review. Mizen must have decided to chase the clear lead of the doyen of gotchas, Andrew Clennell of Sky News Australia. It was Clennell who got Scott Morrison in the 2019 campaign with the price of bread, and who ruined Anthony Albanese’s day in Tasmania last week by asking him what the current cash rate and unemployment rates were. Well, in fact, Albo ruined his own day by taking the bait. But that was only a momentary lapse. It was negligence, not malfeasance, though it was political idiocy. He didn’t ruin his whole election bid, which is what the Liberal campaign headquarters would like us all to think. Few voters have the cash rate or unemployment rate mirror-printed on their retinas. Or the price of a loaf of bread, for that matter. Or care very much, frankly.

Mizen had asked Bandt what the current wage price index (WPI) was. Bandt might have been tempted to divert into a discussion about whey protein isolate (another WPI; just not the wage price index, or indeed the wholesale price index) but as he says, elections should be a contest of ideas. They’re not about dietary supplements. Vacuity might rule, but that doesn’t mean it’s a good thing. The excellent online journal of satirical record, The Shovel, suggested in the aftermath of the Albo upset that he should just Bing it. That brought many readers a smile. In these dark days, you must find your giggles where you can.

They’re around. Leading giggle George Christensen, retiring National Party MP for Dawson in Central Queensland. He’s more widely known as the member for Manila, since his pursuit of personal interests in the Philippines’ largest city was where he was often seen for a lengthy part of his parliamentary service. He has switched to One Nation and is No. 3 on their Queensland Senate ticket. It won’t get him a seat in the salmon pink chamber, but it may get Pauline Hanson back into the Senate.

Still in Queensland, and still on the loopy fringes, Clive Palmer is spending a fortune (hopefully this time it will be his own) on advertising his United Australia Party. He’s now its chairman. Its leader is the former NSW federal Liberal and leading conspiracy theorist Craig Kelly. Their advertisements are a giggle. Freedom forever! Regulate the mortgage rate! Vote UAP and save Australia!

Meanwhile, back on centre court where the top seeds play, Morrison has now completely walked away from a federal integrity commission – he promised one in his 2019 election platform – and blamed Labor for this since it failed to agree with everything in the government’s outline proposal. Apparently, with Morrison, it’s either his way or he’ll block the highway with the wreckage of his special operation. He even managed to call NSW’s ICAC – a body that has earned widespread and deserved respect – a kangaroo court.

It will be interesting to see where opinion polling takes us as the campaign gains momentum, or at least some longevity. Adam Bandt, showing that hubris is not a commodity restricted only to the major parties, made the mistake last week of spinning the Greens’ “growing support” levels a step too far for ABC TV’s Breakfast News’s feisty co-host Lisa Millar. She shut him down. They all do it, politicians that is: gilding their lilies and making outrageous claims about their brand of snake oil.