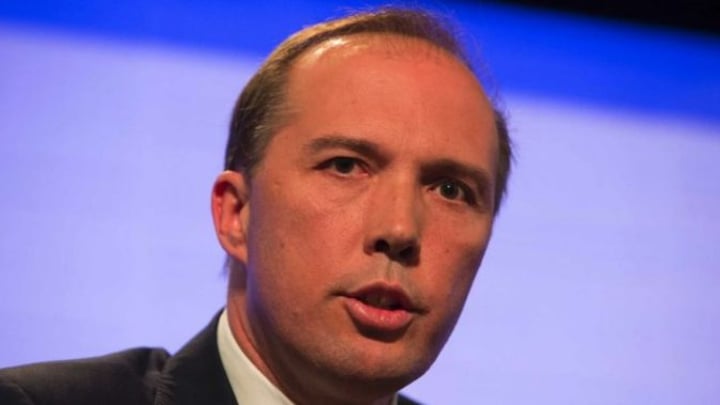 Peter Dutton has insisted forcing all migrants who want to live in Australia to learn the english language is a “no brainer”.

The immigration minister echoed calls by Citizenship Minister Alan Tudge on Thursday, who called for tougher english language tests for migrants wanting to move to the country – ensuring they become better integrated into the local culture and society.

Speaking on 2GB radio, Dutton called on Labor to support the push and questioned why MPs hadn’t thrown their weight behind it already. While he admitted he’s unsure of Opposition Leader Bill Shorten’s current stance on the issue, he urged all politicians to support the proposed legislation.

“It’s a no-brainer. It’s providing support for women who, in some cultures, aren’t treated equally,” he told host Ray Hadley.

“We want those women to have an education, to see their daughters get a driver’s licence… whatever it might be. If you’re in Australia we don’t ask you to abandon your culture or your heritage but if you’re in Australia you abide by our laws. There is one law that applies equally to every Australian, regardless of your background or place of birth, and people need to understand that… The majority of people do.”

The minister added: “If people want to become Australian citizens… we need to have demonstrated that people integrated into our community, that they are working. There are lots of reasons that this is a good law, and we’ll continue to push through.”

He went on to say the government was also aware of problems in the partner visa system, with some people “concocting stories” to stay in the country. He insisted: “We’re not going to be a soft touch on this.”

It comes just weeks after a top newspaper editor sparked controversy ago by calling for the same rules, claiming migrants should even speak english in the privacy of their home.

“I think so many reasons why so many people have deserted the Liberal National Party in the last few years and gone to parties like Pauline Hanson’s and Clive Palmer’s is that they have been very vocal on migration and vocal on immigration,” Gleeson told Sky News.

Sunday Mail editor Peter Gleeson: The average Australian is sitting back and looking at some of these people and going 'well you don't speak English at home, you're failing to integrate properly' – we just want these people to be Aussies.

“I think that a lot of people, the average Australians, are sitting at home thinking ‘well OK, I want to buy a house in Sydney, but because of the immigration policies of the previous Federal government’s, because the way they have allowed a lot of people into this country with plenty of dough, I can’t afford a house in Sydney’.

“They are also sitting back and looking at some of these people thinking ‘well you don’t speak English at home, you’re failing to integrate properly into mainstream Australia’, we just want these people to be Aussies.”

In 2016, there were over 300 separately identified languages spoken in Australian homes, the 2016 census confirmed. On top of that, 21 per cent of Aussies spoke a language other than English at home.

Responding to the controversial comments, Labor MP Stirling Hinchliffe said Gleeson had failed to understand what “being an Aussie” is. He tweeted: “Peter Gleeson is nice guy who I hope regrets this. Considering that 21 per cent of Australian families speak a language other than English at home, I think he doesn’t understand what being an ‘Aussie’ is.”

Peter Gleeson is nice guy who I hope regrets this. Considering that 21% of Australian families speak a language other than English at home, I think he doesn’t understand what being an “Aussie” is. #AussieAs https://t.co/C0DO9F8CUW

Meanwhile, Labor MP Martin Pakula added that both his parents hadn’t spoken English when they first moved to Australia, but they have both gone on to have hugely successful careers in society.

My mum arrived here as a 6 year old. No English. Ended up being a school teacher for decades. Dad was born here but spoke no English at home. Became a lawyer. I’m the Attorney General of Victoria, and you – mate – can get stuffed. Australian enough for you? https://t.co/9EbACWqZrB

“My mum arrived here as a 6 year old,” he wrote. “No English. Ended up being a school teacher for decades. Dad was born here but spoke no English at home. Became a lawyer. I’m the Attorney General of Victoria, and you – mate – can get stuffed. Australian enough for you?”

Do you think all migrants should have to learn english, and pass tougher english language tests?