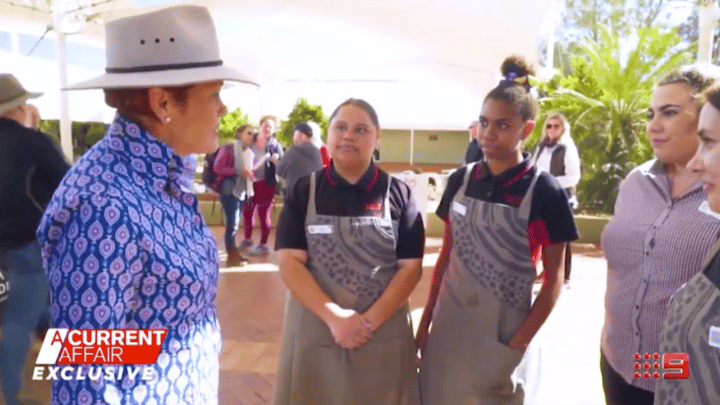 Pauline Hanson spoke to young women working at the Uluru site about the plans to ban the climb of the rock. Source: Twitter/ A Current Affair

While Pauline Hanson’s dream of climbing Uluru crashed and burned last week with her shoes creating a problem on her journey to the top of the rock, the One Nation leader certainly wasn’t shy to share her opinion on the scheduled ban of the climb, claiming to a group of young women that she’s indigenous and the land is hers too.

Travelling to the iconic rock to meet with locals and spread her view, the senator made an effort to speak with those of varying ages, including a group of cafe workers at the site. However, the chat, captured by Channel Nine’s A Current Affair didn’t go down well with the women who questioned her bold statement.

“As an indigenous person, climbing Uluru is very disrespectful,” one member of the group said. To which Hanson replied: ““I’m indigenous, I was born here, I’m native to the land. So, you know, I’m Australian as well, and I’m Indigenous.”

The girls quizzical looks were noticed by the A Current Affair reporter, who commented how doubtful one of them appeared at hearing Hanson’s words. “She’s Indigenous?” the woman queried. To which Hanson replied: “Yeah I am. “Do you know the word Indigenous? It means native to the land, I was born here. Where’s my land if not Australia?”

Prompting the woman to reply: “England?”.  Meanwhile, at another point in her interview with A Current Affair Hanson compared the closure of the climb to Sydney’s Bondi Beach.

“People have been climbing the rock all these years and now they want to shut it down,” she exclaimed on the program. “It’s no different to coming out and saying we’re going to close down Bondi Beach because there are some people there that have drowned. How ridiculous is that?”

Hearing her statement the women she had previously spoken to added: “I like how she compared Uluru to Bondi Beach.” Hanson didn’t back down responding: “It’s about a comparison to a lot of Australian people so it’s not being disrespectful it’s putting it in comparison so a lot of people understand.”

The pollie has been openly protesting the ban on the Uluru rock climb for months, before venturing out to Ayers Rock herself to make the steep and tough climb in protest. But even the best-laid plans don’t always work out.

And Hanson was left fairly red-faced after her attempt at the controversial climb fell flat, as she became stranded halfway up and seemingly unable to get herself back down again. In footage aired in the A Current Affair episode, the panicked pollie appears to let the stress get the better of her on the steep slope.

“I’m not going up any further… Seriously I cannot walk down here, my boots are that bloody old,” she tells her team while sat on the slope and appearing to refuse to go any further.

Uluru is set to be closed off to all climbers in October following continued protests from Indigenous groups. “People have been climbing the rock all of these years and now all of a sudden they want to shut it down?” she previously told Deb Knight on Nine’s Today show.

“The Australian taxpayers put in millions, hundreds of millions of dollars into it and they’re wanting another $27.5 million to upgrade the airport there for the resort,” she added previously. “Now the resort has only returned $19 million to the taxpayers only just recently. It employs over 400 people there, 38 per cent are Aboriginal and Torres Strait Islanders.

“It’s money-making. It’s giving jobs to indigenous communities, and you’ve got thousands of tourists who go there every year and want to climb the rock.”

Have you ever climbed Uluru? Do you agree with Pauline Hanson that it should remain open to climb? Or do you think it is disrespectful to climb it?