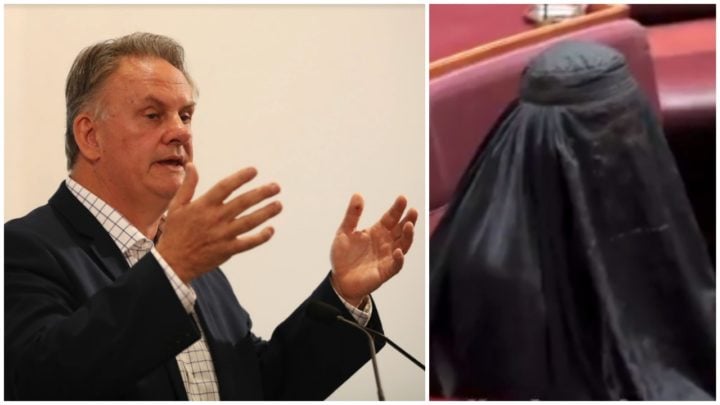 One Nation leader Pauline Hanson, seen right in the Senate in 2017, has previously called for the burqa to be banned. Source: Getty/A Current Affair.

One Nation candidate Mark Latham wants to see the burqa banned in all New South Wales government buildings, labelling the Islamic garment as “sexist and antisocial”.

The former Federal Labor leader announced the proposal as part of his campaign to be elected to the Upper House of the NSW parliament when voters head to the polls in March.

“One Nation policy for the March election is to ensure that Islamic full-face coverings are removed in all NSW Government buildings,” a statement on the One Nation website reads. “Our policy will also ensure that in security screening processes (such as airports and banks) if caps, hats and helmets have to be removed, then Islamic head/face coverings should also be removed.”

Latham, who served as Leader of the Opposition between 2003 and 2005, said he believes there is no place for the “sexist and antisocial” garment in NSW government buildings.

“There’s no doubt the burqa is sexist, it’s there so other men can’t look at the bare flesh of women,” he told Sunrise on Tuesday. “In the era of #MeToo, all these lefties racing around, why haven’t they been targeting the sexism underpinning the wearing of the burqa.

“In terms of it being antisocial, if I was wearing a balaclava or black hood right now, you’d think it was the strangest thing ever.

“The truth is we can’t build a stronger society unless we talk to each other face to face, literally look at each other in the face and communicate that way. It’s a policy to bring people together where you can actually talk to each other across racial and religious boundaries.”

.@RealMarkLatham will push to ban the "sexist and antisocial" burqa in banks, airports and government buildings if he’s elected into the NSW upper house in March. pic.twitter.com/HGkuTTPknc

Scott Morrison was asked for his views on the policy on Channel 7’s Sunrise program, with host David Koch asking whether the PM would consider extending the proposal to include all Commonwealth buildings.

The prime minister said: “I have never been for making hard laws about how people go about their daily lives and what they wear. I don’t think that’s ever been something that we’ve supported.

One Nation party leader Pauline Hanson previously raised the issue of banning the burqa on a number of occasions, including in September last year when she slammed feminists in parliament who disagree with her views on facial veils as “pathetic”.

Speaking to Karl Stefanovic on the Today show, the 64-year-old Queensland Senator said: “Here they are standing up for women’s rights, but there are a lot of women who are forced to wear the burqa by their male counterparts.

“They’ve actually said it in programmes that I watch that they want to get rid of the burqa, or other women who have moved away from the ideology of Islam.”

Hanson also stirred outrage in the Upper House in August 2017 when she arrived for the Senate’s Question Time wearing a burqa. She was campaigning against the Islamic dress at the time, claiming it poses a security risk.

Do you think this policy is a good idea? Or do you think it’s wrong for a government to outline what people can wear?