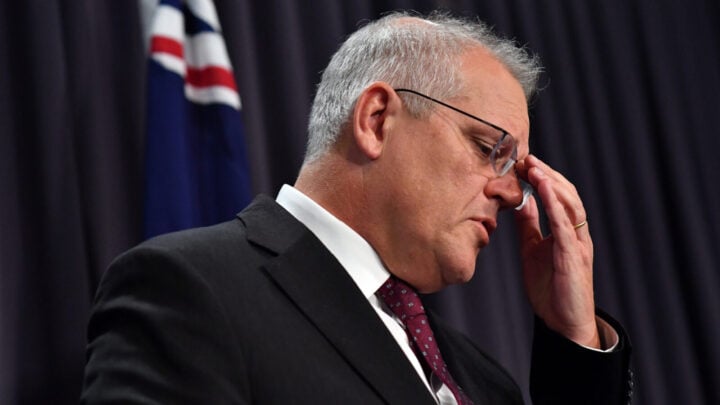 Morrison has come under fire for his decision to relax isolation rules for essential worker. Source: Getty Images.

Prime Minister Scott Morrison has announced new changes to Covid-19 close contact rules in an effort to ease the pressure on supply chains and address the growing food supply shortage.

However, not all are happy with the decision with unions blasting the decision claiming the move will result in more positive cases and greater strain on an already stressed supply chain.

Following the January 13 National Cabinet meeting, Morrison announced the expansion of those who could return to work with a negative Rapid Antigen Test (RAT) following a close contact. A move that will exempt thousands of workers from close contact isolation in critical sectors including transport, freight, and logistics who can now return to work.

“Worker absenteeism due to symptomatic COVID-19 illness, identified asymptomatic infection and the required isolation of close contacts is impacting on critical supply sectors and supply chains across all states and territories,” he said.

“Secretary Kennedy advised that current arrangements could see 10 per cent of Australia’s workforce including many workers in critical supply sectors withdrawn from the workforce.

“National Cabinet was briefed by the Director-General of Emergency Management Australia, Joe Buffone on the work of the National Coordination Mechanism (NCM) noting that transport, freight and logistics is a high priority. The Permissions and Restrictions for Essential Worker Interim Guidance will assist in workforce pressures across the supply chain.

“National Cabinet agreed to the importance of keeping critical sectors open and agreed to extend the furlough arrangements in place for food and grocery supply chain workers to other sectors.

“National Cabinet noted that the changes made to furlough arrangements for food and grocery supply chain workers is starting to improve supply chains.

“Changes will be made as soon as possible, where they have not already been made under state and territory public health arrangements, to include essential workers in all transport, freight, logistics, and service stations

“National Cabinet has cut the last thread of hope the transport industry had of recovering from chronic worker shortages,” he said.

“Distribution centres will become virus hotbeds sending more essential workers to their sick beds, infecting their families along the way.

“We’re already hearing reports of close contact transport workers forced to return to work, leaving childcare to sick partners. Other close contacts were handed gloves and wipes and told to keep working until they tested positive.

“These are the workers who’ve kept us going throughout the pandemic, now given no choice but to risk their own health and that of their families.”

“These changes that were announced at the start of this week obviously have come in very quickly and this will allow us to get more of our key team back in our distribution centres and that wider supply chain,” he said.

“So we welcome the changes coming in. They are obviously subject to very strict safety protocols but it is great to see we are going to get some of those team members back.”

The nation's leaders have agreed to major changes to COVID self-isolation rules so more Aussies can get back to work. pic.twitter.com/EwLDm2IDja

“I think we would always take our guidance of where we are up to from the Government,” he said.

“I noticed (chief medical officer) Paul Kelly yesterday did say NSW is nearing its peak and other states will follow that, so I think we’re going to be in this for some weeks, but we all look forward to moving through it.”