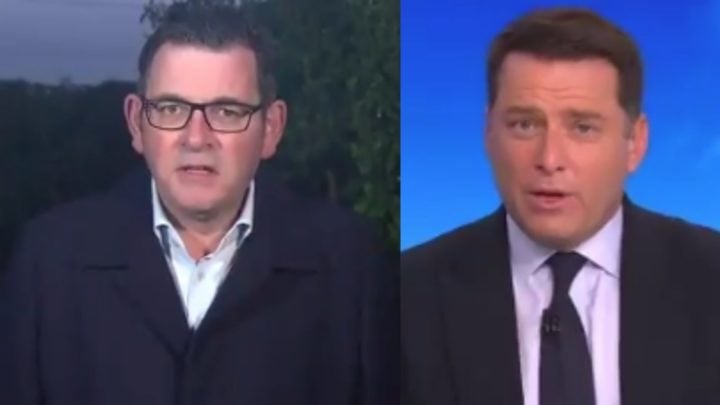 The Victorian premier appeared on Today this morning. Source: Twitter/Today.

Karl Stefanovic put Victorian Premier Daniel Andrews on the spot on Wednesday and asked whether he will resign over his “bungled” handling of the ongoing Covid-19 pandemic, less than 24 hours after it was announced that Melbourne was heading back into lockdown.

The Today host clashed with the Victorian Labor leader live on air this morning and put to him the question of his resignation, and accused the Andrews government of an “unbelievably catastrophic bungle” in its handling of the pandemic.

“We can’t change what has occurred, we simply have to respond to our circumstances. This is a tough measure, we know this will work but only if all Victorians stick together,” Andrews said. “I don’t get the luxury of ignoring this … you’ve got to make the tough calls [and] that’s what I’ve done.”

Stefanovic also slammed the premier for “blaming Victorians” for the growing case numbers, despite having “employed an incompetent private security force to guard those in quarantine”. Andrews deflected the question though and stressed that there is an ongoing independent inquiry into the matter, stating “it’s not for me to be sitting in judgement of myself”.

Karl wasn’t done though and pressed the politician on his leadership throughout the crisis. The journalist said: “You managed the bushfires, you managed the start of Covid, you did an incredible job. But it’s difficult to recall a bigger political bungle than this.”

“Your critics are calling for a change of leadership. Will you resign?” Karl asked. However Andrews hit back and claimed he will “stay the course” and “get this job done”.

“This is a pandemic,” the Victorian leader said. “And I’m getting on with doing the job I have to do.”

"You talk about fear. If this gets right away from us then we'll see some very ugly scenes, great tragedy, thousands of people in hospital, and many, many people dying." Victorian premier Daniel Andrews on Melbourne going back into strict lockdown from midnight tonight. #9Today pic.twitter.com/nlt0qatOEz

Karl then directed the conversation towards the ongoing hard-lockdown at nine public housing towers in Melbourne, asking when police will be removed from the residences and those living there held to the same stay-at-home order as the rest of metropolitan Melbourne.

“We’re making great progress going door to door, testing each and every one of those residents. They’re in very difficult circumstances. This is a terribly difficult lockdown for them to have to endure,” Andrews said this morning. “As soon as I’ve got the results, the aim is to have them in the same position as the rest of metropolitan Melbourne.”

Andrews has received heavy criticism in recent weeks as the number of confirmed coronavirus cases began to rise once again across the state. And his decision on Tuesday to place the capital city into lockdown for a second time also sparked a backlash. Metropolitan Melbourne and Mitchell Shire will have stage 3 restrictions reimplemented from midnight tonight, for a period of six weeks.

Yesterday’s announcement came in response to the state’s highest-ever daily case total, as 191 new Covid-19 cases were recorded in just 24 hours. Those in affected areas will be prevented from leaving their homes for any purpose other than work, food, exercise or medical care. Groups of no more than two will be able to gather while cafes, restaurants, pubs, clubs and bars are back to takeaway only. Additionally, the NSW-Victoria border closed for the first time in a century last night.

“I think a sense of complacency has crept into us as we let our frustrations get the better of us,” Andrews said. “I think that each of us know someone who has not been following the rules as well as they should have. I think each of us know that we’ve got no choice but to take these very, very difficult steps.”

Speaking on Wednesday morning, the Victorian premier confirmed that the state had recorded a further 134 new cases since Tuesday.

Do you think the Melbourne outbreak could have been avoidied?