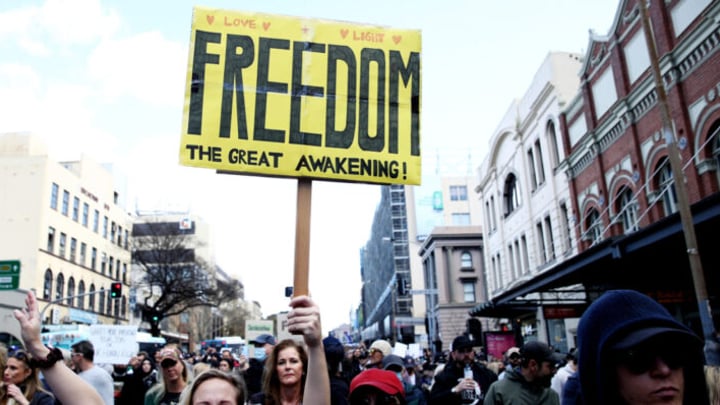 Thousands of people descended on cities across Australia over the weekend to protest against Covid-19 vaccinations and lockdowns, with politicians and the public alike slamming the act as “disgusting” and “selfish”.

The Worldwide Rally for Freedom events were organised via Facebook and Telegram, with dozens of events taking place on Saturday, in Australia and globally. Attendees ranged from different groups in opposition of lockdowns, including anti-vaxxer groups, covid-deniers, conspiracy theorists, QAnon supporters and far-right extremists.

Official estimates say around 3000 protesters turned up in Sydney, while organisers claimed attendance was closer to 30,000 in Sydney and 8000 in Melbourne.

New South Wales is amid its worst-ever Covid-19 outbreak, with 1,829 locally acquired cases currently active as the Delta variant sweeps across the state and Greater Sydney enters week five of lockdown. Premier Gladys Berejiklian has she said is heartbroken by the illegal protests that took place in Sydney’s CBD, saying that those in attendance should be ashamed as they “compromised the safety” of residents of the state.

“Millions and millions of people across our state are doing the right thing, and it just broke my heart that people had such a disregard for their fellow citizens,” she said. “Can I say how absolutely disgusted I was. It broke my heart.

“Each of those people who protested illegally, I’m sure have loved ones. They are going to go home and risk passing that virus onto the most closest people to them.

“Thank you to all of us doing the right thing and to those of you who aren’t, you should be ashamed of yourselves.”

Prime Minister Scott Morrison also slammed the protesters as “selfish” and “reckless”. “It offended many, many fellow Sydneysiders,” the PM said. “People understand there are frustrations with lockdowns, but that type of behaviour doesn’t help anybody. Let me deal with what we saw in Sydney yesterday. Of course it was selfish. It was also self-defeating. It achieves no purpose.”

Coalition MP George Christensen voiced support for the illegal anti-lockdown rallies while at an event in Mackay on Saturday, saying that civil disobedience is “moral” and “the only response to laws that restrict freedom”.

The PM stopped short of reprimanding his controversial Coalition colleague, saying, “As for other parts of the country that aren’t in lockdown, well, there’s such a thing as free speech. And I’m not about to be imposing those sort of restrictions on people’s free speech.

“In Queensland, there are no lockdowns. And the nature of that event to the best of my knowledge was very different to the event in New South Wales.”

Deputy Prime Minister Barnaby Joyce mirrored the PMs comments, saying that while he doesn’t agree with Christensen’s views, he has every right to express them.

Former Liberal MP turned independent, Craig Kelly, told The Guardian that Berejiklian was responsible for the Sydney protest because she had “arrogantly taken away people’s freedom to earn a living, even in open-air building sites, without any evidence that this will achieve anything”, despite the health advice backing lockdowns as a way to prevent coronavirus spread and further deaths. “When they parrot on about denying people their freedom to earn a living until some time to October – it’s a wonder that a million people didn’t take to the streets,” he said.

Liberal Democrat candidate, John Ruddick, filmed himself at the unlawful Sydney rally, later boasting on social media he had been fined $1,000 for his attendance.

The public didn’t hold back on sharing their comments on social media, taking to the 7News Facebook post to slam the protesters.

“Unfortunately there is no vaccination against stupidity, ignorance and selfishness,” one wrote.

“Yesterday’s protest disregarded the excellent work of the community. This is disappointing,” another added.

While others took their frustration out on the government, slamming the premier for their “weak approach” to lockdown.

“You haven’t kept it at bay Glad, you’ve lost control,” one said, while another added, ” Gladys you need to do the right thing. Lockdown the entire state.”

“Clearly these lockdowns are not working, get tough so we can finally end this,” another said.

What do you think of those who protested on Saturday?