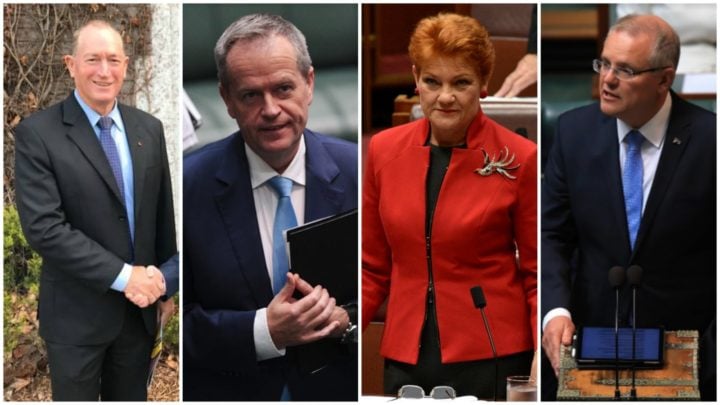 The nation will head to the polls in May, with the exact date of the federal election yet to be announced. Source: Getty & Facebook/Fraser Anning.

There are just four months to go until the nation heads to the polls in the next federal election, but as the Liberal Party and Labor battle it out at the top, they may find themselves faced with dwindling support as voters confess to losing faith in the two major parties.

Labor and the Liberals will go up against the usual rivals, such as the Greens and One Nation, in four months’ time as Scott Morrison and Bill Shorten battle over the prime ministership, but the number of independent candidates, as well as those from smaller political parties, has also begun to rise in recent years.

On Friday it was announced that Fraser Anning had moved to register his own political party, the Conservative Nationals, following in the footsteps of Clive Palmer, who revived his United Australia Party last year, and Pauline Hanson, who launched her One Nation party in 1997 after being disendorsed by the Liberals.

And independent candidates, such as Dr Kerryn Phelps who claimed ex-Prime Minister Malcolm Turnbull’s former Wentworth seat in a by-election last year, and Rob Oakeshott, who on Tuesday announced his intention to run at the federal election, have also gained further credence.

Starts at 60 readers are among those who have voiced concerns about the two major parties, with many vowing to support alternative parties or independent candidates come May.

We asked our community to cast their vote in an online poll, with the majority of respondents (63.5 per cent) admitting they had lost faith in the major parties, vowing to place their vote outside of the two major parties on election day, with just 36.5 per cent intending to vote Labor or Liberal.

“Minor parties have an important role in representing those who do not want to vote for the major parties,” reader Valerie Bush said.

“They are are now a big part of the checks and balances and dialogues that are part of our democracy. Minor parties are a force for renewal. They can bring up issues that the major parties wouldn’t normally touch for fear of losing votes in their electorate. Like it or not minor parties are here to stay.”

Kerry Charrett said: “I have lost faith in both parties and will continue voting Green. They hold all the same values that I do. Honesty, decency and care of the environment.”

While Sonia Peterson added: “I have definitely lost faith in the major parties and will be voting for the independents.”

However, others disagreed, including Joan Rowe who said: “Like it or not we have a two-party preferred system. Any of the other parties are not big enough or prepared enough to take Govt [sic]. Most of them are formed to try to keep a check on the Governing party.”

Jan Coleman added: “Will definitely not be voting for Anning, Hanson, Palmer or any other pretend politician.”

The latest Newspoll, published by The Australian last month, suggested the Coalition could be set to suffer a defeat at the hands of Labor, as support for the government had dipped to a historic low.

Support for Morrison’s government slumped as the Coalition found themselves a record 10 points behind Labor at 45-55 on a two-party preferred basis for the third Newspoll in a row.

According to the results, the Coalition’s primary vote stood at 35 per cent, with Labor at 41 per cent, just six months out from the next election. The findings also revealed that less than a quarter of Australian voters believe the Coalition will bag a third term in power in May 2019, with one in three Coalition voters even believing that Labor will take the win.

What are your thoughts on this story? Have you lost faith in the two major parties?