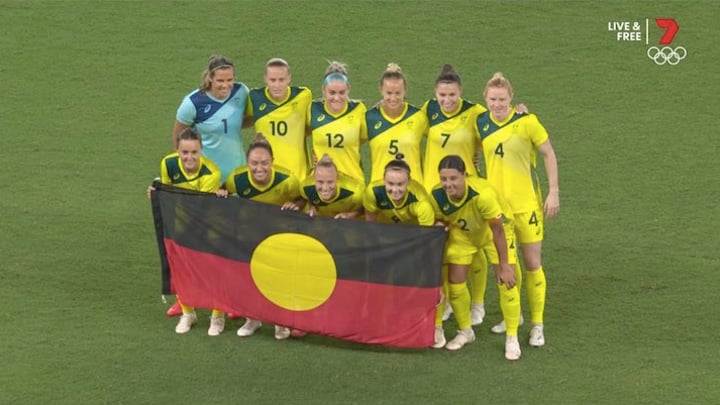 The pregame gesture has divided the nation. Where do you stand? Source: Twitter/ Channel Seven

The Australian women’s soccer team, the Matildas have caused a stir by posing with the Aboriginal flag at the Tokyo Olympics, sparking debate as to whether it is it appropriate for those representing Australia to present a flag other than the national flag.

The Matildas proudly posed with the flag prior to their clash against New Zealand on Wednesday night, with fans taking to social media to share their thoughts on what the team said was a move to “show unity” within the team and ensure everyone “felt represented”.

The International Olympic Committee previously hasn’t looked kindly on such gestures but have relaxed their rules ahead of the Tokyo Games, however, it seems fans were divided over the gesture.

“Everything was for this moment and we feel as prepared as ever.” @samkerr1 ‘s post game comments after @TheMatildas opening night victory over New Zealand.

The Matildas now look ahead to Sweden.

Hundreds took to Facebook posts to praise the team for the “inclusive” action, with many saying it was time the national flag was redesigned to eliminate the Union Jack.

“So many great things about this! Hope this photo becomes as iconic as it deserves to be,” one person said on Facebook.

“Absolutely fantastic – about time we did this. I would be proud to have this as our national flag!” another commented.

Another wrote, “RESPECT. Good on you!… New Zealand and Canada have this for their First Nation People but not this ancient land, makes my family and friends sad.”

While many congratulated the team, it seemed just as many disagreed, with people slamming the gesture for politicising sport and for using a flag that failed to represent the “whole country”.

“So which country are they representing? I have no problem with flying the aboriginal flag but surely with the Aussie flag alongside!” one person wrote.

“These athletes are there representing their country. I have no problem with them holding an Aboriginal flag as well as the Australian flag. In this supposedly “inclusive” New World we are living in they just “excluded” many Australians and many supporters. They have lost my respect!” another said.

“The only powerful statement they have made is that they are NOT Australian. We have an Australian flag for a reason, like it or not, it is what it is. Time for the government to intervene, remove them from the Games and let them find their own way home. Absolutely disgraceful!” one commented.

The Matildas have two Indigenous Australian players, Lydia Williams and Kyah Simon, who with their teammates were more than happy to show their support.

Sam Kerr, who scored one of two winning goals against the Football Ferns said she was just as proud of the team’s performance as she was of their pre-game gesture. “We are really proud of it. It was something we spoke a lot to as a team. We let the Indigenous girls drive it,” Kerr told Channel Seven post-match.

“We felt that we didn’t want to just do something that goes along with the grain, we wanted to do something that was relevant to our country and show unity within our group and let everyone feel that they’re represented.”

Fellow goalscorer Tameka Yallop also weighed in at a post-game press conference saying it wasn’t only about supporting their two indigenous team members but the broader Indigenous community.

“We are obviously in support of no racism, we definitely wanted to take a stand and show our support of that, and we also wanted to represent not just Kyah Simon and Lydia Williams within our team, but the broader Indigenous Australians, and give our own Australian flare to shed light on that aspect of it as well,” she said. “We just wanted to stand together for the Australian culture and the Indigenous side of us.”

What do you think of the gesture?