Man, 68, dies after being bitten by snake on camping trip 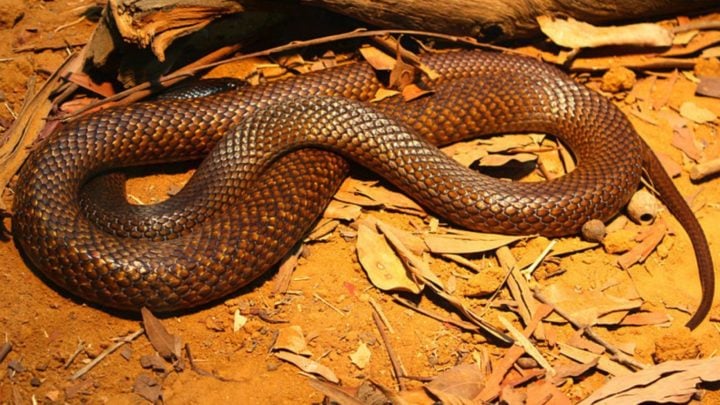 The man reportedly died after being bitten by a western brown snake.

A man has died after being bitten by a snake on a camping trip in the Northern Territory, according to reports.

The 68-year-old had been camping in Garig Gunak Barlu National Park, in the state’s north, when he was attacked by the western brown snake. According to Nine News, a statement from the Department of Tourism, Sport and Culture stated the man passed away despite the best efforts of medical staff at a nearby ranger station.

“Treatment immediately commenced in consultation with the District Medical Officer and CareFlight,” the statement reportedly read. “Sadly, the man lost consciousness.” The man had been visiting from interstate at the time.

Western brown snakes, also known as Pseudonaja nuchalis, are native to Australia and are well known for being highly venomous and fast moving. They can vary slightly in appearance depending on where in Australia they are found.

The Garig Gunak Barlu National Park can be accessed by travelling through Arnhem Land and is particularly popular for camping, bushwalking, birdwatching, fishing, boating and photography. It is fairly remote, with ranger stations set up across the area for emergencies like this.

According to the Royal Flying Doctor Service, there are around 3,000 snake bites in Australia each year, with recent figures showing around 550 hospitalisations and an average of two deaths per year. While most usually happen in regional and rural areas, the service claimed that the majority are usually close to buildings.

The RFDS south-eastern section updated its advice on how to treat a snakebite in 2017, after a study overturned many old concepts about the best actions to take. The Australian Snakebite Project collected data over 10 years from more than 1,500 patients, and helped identify not only the snake most likely to bite, but also the people most likely to be bitten.

When it comes to bites, the brown snake is the most common source, followed by the tiger snake, and the red-bellied black snake. And men in their 30s are far more likely to be bitten than women – they make up 75 per cent of all bite victims. The findings busted a number of myths on how to treat a snakebite.

Have you ever had a nasty run-in with a snake?