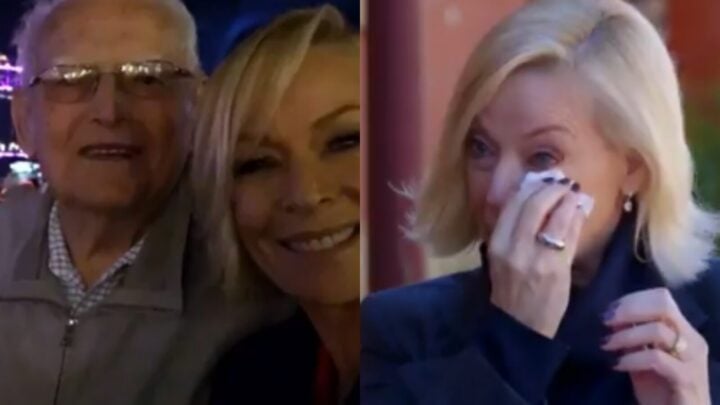 Veteran 60 Minutes reporter Liz Hayes has opened up about her father’s death in an emotional segment on Australia’s “broken” regional health system.

Hayes’ 88-year-old father Bryan Ryan, who had a heart condition, died in Taree, New South Wales on September 11, 2019, as a result of a catastrophic stroke. The journalist revealed her father was originally admitted to a local public hospital for pneumonia in his hometown of Manning River. He was then transferred to a nearby private hospital where he successfully recovered. But during his eight-day stay, he was denied his regular medication, which included a blood thinner vital.

“On the night Dad suffered a catastrophic stroke, clinical notes revealed that he’d not received his prescribed and vital anti-stroke medication for eight days,” she said on the Channel Nine program on Sunday night. “It was hard to believe — how could such a basic medical error occur?”

She continued: “He said he was always fearful something like that would happen. I instinctively knew that what I was witnessing was wrong.”

Hayes then went into detail about the night her father suffered the stroke, saying she received a call from the private hospital where he was recuperating saying he had suffered a massive stroke and was being transferred back to the public hospital.

“At two in the morning, Dad was wheeled into an empty room in a ward on the top floor,” she recalled. “Other than his family, no one came to see him or us. We were standing there thinking ‘something must happen now’, you don’t just park a patient and don’t tell somebody.”

It was then that Hayes realised what had happened after she discovered notes on her father’s medical chart that proved he hadn’t been receiving the blood-thinning drugs he relied heavily upon.

“His notes were just plonked on the end of the bed and that’s when I saw the terrible truth,” she said. “Dad’s medical notes states that the doctor from the private hospital came to the emergency department to advise that he hadn’t been given the critical medication.”

Hayes continued: “If that hadn’t had happened to dad I feel confident he wouldn’t have suffered that stroke and he would still be here. I can’t believe something that simple could go wrong.”

In 2019, Liz Hayes’ father Bryan Ryan died at Manning Base Hospital as a result of a catastrophic stroke. The terrible truth was that the medication prescribed to prevent that stroke was not given to him for eight days. #60Mins pic.twitter.com/yFOYWDgbVh

The journalist said what had happened to her father led her to further investigate the incident. “So began my quest for answers,” she said. “And my exploration of the rural health care system.”

She continued: “Seven million people live in rural and remote regions of Australia. Meeting all their health requirements is a challenge. Distance is a disadvantage.

“People in the country, of course, don’t expect that every town must have a hospital with the capabilities of conducting brain surgery, but they do expect to get professional basic health care.”