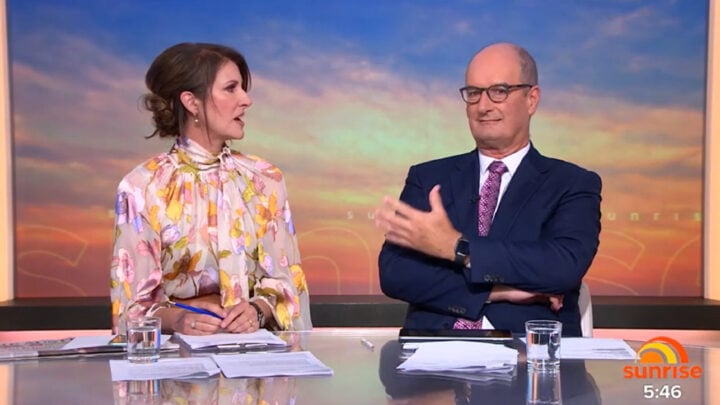 Kochie has fired up over outdated rules impacting those who want to donate blood, but cannot. Source: Getty

Sunrise host David Koch has taken a jab at an archaic blood donation rule this morning, February 1, in response to Australian Red Cross Lifeblood asking for more blood donors, as regular donors have been sidelined due to Omicron.

In a media release published on February 1, 2022, Australian Red Cross Lifeblood called out for new donors, and those who haven’t donated in a while, to “come off the bench”, as more than 100,000 donors face the impacts of Omicron, either isolating because of current infection, or close contact with a person currently unwell with the virus.

Kochie indeed supported Lifeblood’s call out for more donors, before criticising Lifeblood for a rule which rules him, and his family, out from stepping in to donate – simply because they lived in the UK for a period.

“I’ve never been able to give blood since working and living in the UK in the ’90s,” “Kochie criticised.

“The thing is, my kids can’t either, the three that were born then.”

Lifeblood’s website details that people who lived in the United Kingdom for six months or more between 1980 and 1996, are not allowed to donate blood to The Australian Red Cross Lifeblood.

Lifeblood outlines the details of this, saying: “Lifeblood currently can’t take blood or milk donations from people who lived in the UK for six months or more from 1980–1996.

“This is related to the fatal variant Creutzfeldt-Jakob disease (*vCJD, the human form of the bovine condition sometimes known as ‘mad cow disease’):

“Data shows the peak rate of vCJD was in 2000. In recent years the numbers have dramatically declined with only two cases in the UK since 2010. Despite no transfusion-transmission cases occurring since 1999, governments and blood services have been cautious about removing the blood donation restriction because of uncertainty around how long someone could incubate the disease before they show symptoms.

“We have recently prepared a submission proposing a change to this. Our submission is currently being reviewed, and we look forward to having more to say soon.”

Lifeblood’s submission to change the rules surrounding *vCLD, and those who lived in the UK between 1980 and 1996, was prepared independently to Omciron, and was not a reactive action in response to the current situation regarding Omicron.

“We haven’t seen cases (of mad cow) since about 2010 and that’s why now is the opportune time for us to be revisit that based on the latest evidence,”said Lifeblood spokesperson Cath Stone.

According to Stone, approximately 20 per cent of Lifeblood’s regular donors. Recently, less than one in two appointments have resulted in an actual donation.

“Traditionally we see high numbers of no shows and cancellations during the winter months, with many regular donors unwell, but we’ve never seen numbers this high in the middle of summer,” Ms Stone said.

“It’s a real challenge for blood supplies because even in the midst of a pandemic there are still cancer patients, trauma cases, pregnant women and unborn babies who all require donated blood.

“If you are feeling well, and eligible to donate, your team needs you to get off the bench and help out now. You only need to be clear of COVID-19 symptoms for seven days to donate.

“There is no substitute for blood. Cancellations and no-shows are an ongoing problem and new donors are critical to keep supplies flowing to our hospitals.”

“Unlike some other parts of the world where patients have been unable to get timely blood transfusions, Australia’s blood supply has remained sufficient throughout the pandemic, but we need more blood donations for this to continue” Ms Stone said.

“Our growing population is relying on just 500,000 blood donors across the country – and right now many of them need someone else to continue this lifesaving work.

“Donating blood will take only one hour of your time, and every blood donation can help save up to three lives.”