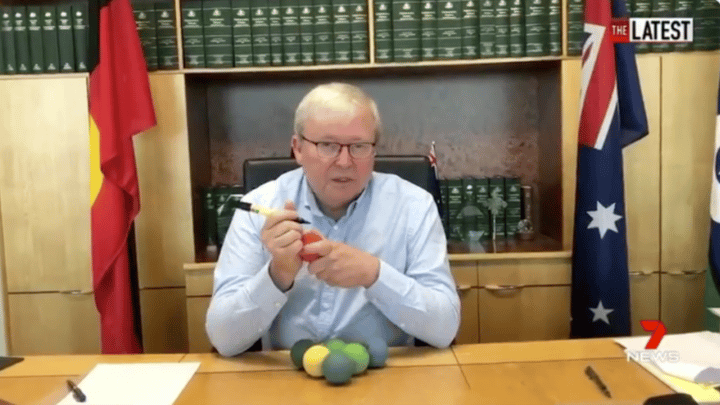 Kevin Rudd has challenged Aussies to battle him in a handball competition to raise awareness of his charity. Source: Twitter/ 7 News Brisbane

Former prime minister Kevin Rudd  will put his sporting skills on full display after challenging Aussies to a handball competition in a bid to promote reconciliation with the indigenous community.

Though he admitted he’s not the best at sport, the 61-year-old warned Australians across the globe to “get ready to die” in a fierce battle on the court, claiming he’s found his sporting talent. Taking to social media this week Rudd urged those across the globe to sign up for a championship game against him as he re-enters the field years after a video of him competing against school kids in the sport went viral.

“Guess what guys?” he explained in a video shared on Twitter. “Come the end of August having overcome the problems of my knee surgery I’m re-entering the field. So any of you guys who are looking for a handball championship game, I’m available.” The former pollie added: “Let my office know. Be very good and get ready …. to die.”

He's the self-proclaimed 'Handball King': now former Prime Minister @MrKRudd is embarking on a national tour to take on anyone bold enough to challenge him on the handball court – all in the name of charity. https://t.co/ibtSDUs6Jy #auspol #TheLatest #7NEWS pic.twitter.com/jMvdLs3bjR

Following his announcement Rudd appeared on 7 News to further discuss his plans and explain his reasoning behind the competition. The previous Aussie leader admitted he’s never been the best at sport but handball seems to agree with him.

“Handball is played by hundreds of thousands of kids around Australia,” he explained on the program. “I have always been looking for a sport in which I could excel, having failed throughout my life to excel at any, so this is it. Basically some kids challenged me to it at the local high school here in Brisbane some years ago. I played, they videoed it, put it up on YouTube, that’s it, went viral and it’s kind of gone on from there.”

While he has been unable to put much pressure on his knee since the surgery Rudd claimed he’s getting back into it with a practice match this week against some kids in Brisbane. “I’ve today had a warm up match,” Rudd explained. “The kids thrashed my but I disregard that as an early start to the season.”

Taking to Twitter Rudd shared a video from the match to show off his skills and warn others to look out as he perfects his moves for the upcoming competition. “Do or die effort today at John Paul College in Brisbane,” he wrote alongside the post.

“My famous ‘wind up’ serve dazzled the local kids But I still lost. Just a warm-up, however, for my upcoming southern tour.”

Do or die effort today at John Paul College in Brisbane. My famous “wind up” serve dazzled the local kids. But I still lost. Just a warm-up, however, for my upcoming southern tour. All promoting @nafiaorg. Read more here https://t.co/IWgy8nNeQQ pic.twitter.com/GjDD0X1tFC

The former politician claimed it hasn’t dampened his spirits though adding during the chat on 7 News: “I’m off to Melbourne, then Canberra, then Sydney and other places in between. So by weeks end I hope to have my domination of the sport well established nationally.”

He continued by explaining its as much a psychological battle as a physical one, while also inviting John Howard for a competition, admitting if he was to take on any pollie it would be him. “It’s deeply psychological because in my case I have no physical co-ordination at all so I basically try and psych out by opponents and it only works really with the primary school kids, the secondary school kids are well ahead of my game and they smash me.

“I think John Howard and I have similar sporting skills so I would challenge Mr Howard to a serious round of handball. I think we could do a half hour match and may the best man win.”

Though a fun competition to be involved with, Rudd explained there is a deeper meaning behind it. The former prime minister said he’s using it to promote the National Apology Foundation for indigenous Australians to spread the message of reconciliation.

Would you challenge Kevin Rudd to a handball match? Do you think what he's doing is a good idea?