In lieu of flowers: Family’s quirky request for grandad’s funeral in funny obit 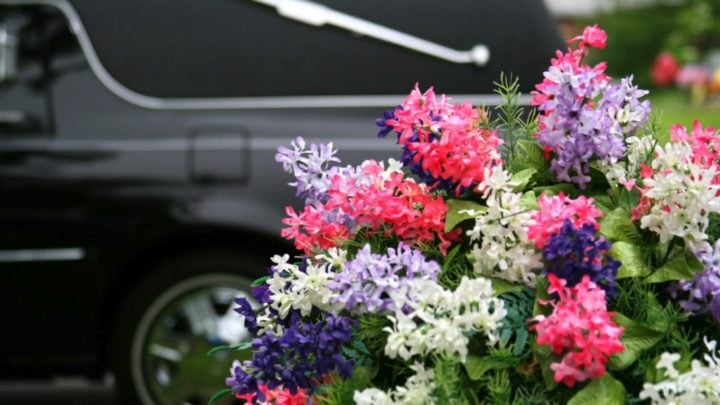 The family of a US grandad made an unusual request in lieu of flowers. Source: Getty.

The family of a “free-spirited” grandad have remembered him with a hilarious obituary in which they made a very unusual request for family and friends ahead of the funeral.

Widar Wes Sahlin’s partner was determined to honour his humorous side in his final send-off, with the first line of a moving and hilarious tribute poem reading: “Wes liked big butts and he could not lie.” From there it went on to keep a touch of humour throughout, while sharing moving anecdotes from Sahlin’s life in New Bradford, Massachusetts, US – including his hobbies, family and career.

The initial poem read: “He hated onions, and his capacity for love could fill the sky. If you knew him, you loved him without having to try. His intentions were pure, levels of patience and empathy so high. Loyalty so vast, no one could deny. From wherever he is, he wouldn’t want you to cry.

“But feel his love from above and the wink in his eye. Chocolate Salty Balls, the road, stage and sky; His spirit and humor (sic) will never die.”

According to local news outlet The Herald News, his partner Stacy Tinkham enlisted the help of friend Amy Rigtrup, who worked at Silva-Faria Funeral Home in Fall River, who eventually wrote the funny poem and obituary for the family. And it honoured him perfectly, as the obit continued after the poem to explain: “Wes lived his life to the fullest and was taken too soon. His life wasn’t traditional, so his funeral director and friend couldn’t let his services – or obituary – be traditional, either.”

A tribute to his family then read: “He’d want you all to know that he loved his daughters, Monika and Olivia, and cherished his granddaughter, Isabella and Gwendolyn, who is on her way very soon. Stacy Tinkham was the love of his life and he loved her daughter Reva as if she were his own.”

Rather than a funeral, the obit stated that Sahlin wanted a celebration of his life instead. The family therefore planned two events, one for November 9 and another for the end of the year, when his youngest granddaughter would be born.

However, it was the request at the end that really stood out, as the obit concluded with the words: “In lieu of flowers, random acts of kindness, awkward but necessary humor (sic), warm hugs and spontaneous shoulder massages would be appreciated.”

Describing Sahlin as “free-spirited”, The Herald News reported that family and friends had since shared their appreciation for the unusual obituary, saying it was a fitting tribute to him. According to the news outlet, Sahlin “acted with local theater (sic) companies, loved performing at karaoke, always carried a harmonica just in case a band would let him join in, and was crazy about motorcycles”.

His career saw him as a “jack-of-all-trades”, often excelling in welding and metal mechanics as well as being a professional massage therapist and a certified personal care assistant. He reportedly met his partner in a theatre production of Sweeney Todd in 2007, where they became friends first before starting a relationship.

Tinkham, who had support from Sahlin’s kids when organising the obit, told the news outlet people would remember him for his “twisted sense of humour” and as “this big, boisterous larger-than-life person who liked being silly and crazy and fun”. She also noted that he had a shy side too, but would never lie to his loved ones – so if you got a compliment from him, you’d know to believe it.

Have you ever come across an unusual request at a loved one's funeral? Would you like a funny obituary like this?