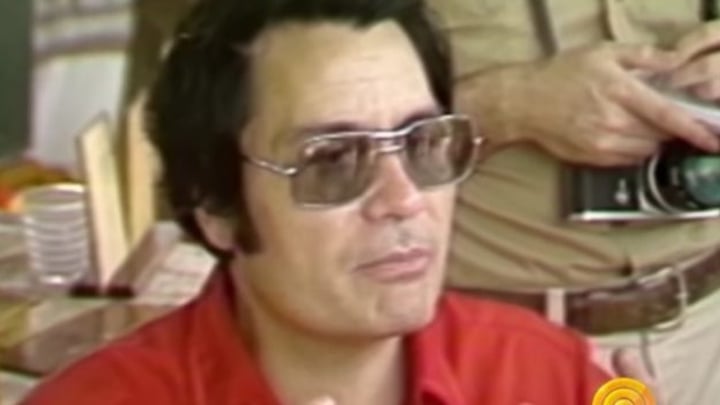 Cult leader Jim Jones led more than 900 people to their death by forcing them to drink a poisonous drink. Source: YouTube/ Today

Flavoured drink Kool-Aid has become a horrific reminder of a terrible day in history, when over 900 innocent people died in one of America’s largest mass deaths in history.

The drink, which was laced with cyanide, killed hundreds of people in just one day with an evil mastermind behind the cruel plan – none other than Peoples Temple cult leader Jim Jones.

Originally known as the Wings of Deliverance church, the Peoples Temple was first formed in 1955, with Jones promising followers a better life and strongly preaching against racism.

However, the cult was far from that as Jones continued to mistreat his loyal followers, humiliating, beating, blackmailing and brainwashing them to surrender all they had, leaving them with nothing.

While he put on a cover, with the group taking part in many humanitarian causes throughout their communities, members of the media had an inkling all was not as perfect as it seemed.

To get away from prying eyes and the growing number of questions, the cult leader moved his band of followers in 1977 from San Francisco to Jonestown, a compound in Guyana, South America, that he had been building for years prior. Tragically, a year later most of them would meet their deaths.

Heroically, one survivor fled in secret with her son before the massacre happened, after realising Jones’ actions were doing her more harm than good.

Speaking to Fox News prior to a documentary on the mass suicide, Leslie Wagner-Wilson described just how terrible the situation was in the cult before the hundreds of deaths, and why she chose to escape.

“He [Jones] was very manipulative and would try to seperate families and destroy marriages, which would give him more power…[And] we thought Jim could read minds so I would stay away. We would say, ‘don’t ever say anything negative when he passes us because he can read our minds’. We were totally fooled in a lot of ways…It just become very controlling. It wasn’t fun anymore,” she explained.

“I had a child…We were basically starving. We were eating rice every day. No vegetables. No nutrients. It just became obvious this place was a prison…I was ready to go. And if Jim had given people the option to go, I think there would have been a lot of people who were ready to get bak to the states…But we had no voice.”

It was November 1978, when the truth behind Jones’ regular mistreatment of his followers was revealed to the world, as US Congressman Leo Ryan travelled to the compound to unveil the cruel activities taking place and rescue those that wanted to break free from the cult leader’s tight grip.

He did in fact execute the first part of his plan on November 18, gathering several people in his vehicle, however their freedom was delayed as other members of the cult launched an attack at the airstrip, where they were leaving to travel home. A total of five people, including Ryan and three members from the media, were shot and killed – while another 11 were injured.

Just weeks ago American congresswoman Jackie Speier, who was an aide to Ryan at the time, recounted the moment she fled for her life from the brainwashed cult members who attacked them as they approached the plane.

Travelling with news crew soundman Stephen Sung and reporter Ron Javers, Speier claimed she should have died on the airstrip as Ryan did.

“But it was not part of the plan. I mean, my whole right side of my leg was blown up except for the femoral artery,” she explained to The Sun.

“Had the femoral artery been severed, I would’ve died in 90 seconds.”

Sadly, the shooting was just the first part of Jones’ cruel plan with the worst yet to come.

While Speier and others tried their best to stay alive, the cult leader ordered all of his followers to drink the fruit drink laced with cyanide and valium, beginning with the children and babies, followed by the adults. While Jones himself was found dead with a gun shot wound.

In the end over 900 people died with around 300 of them identified as children.

Do you remember this tragedy?