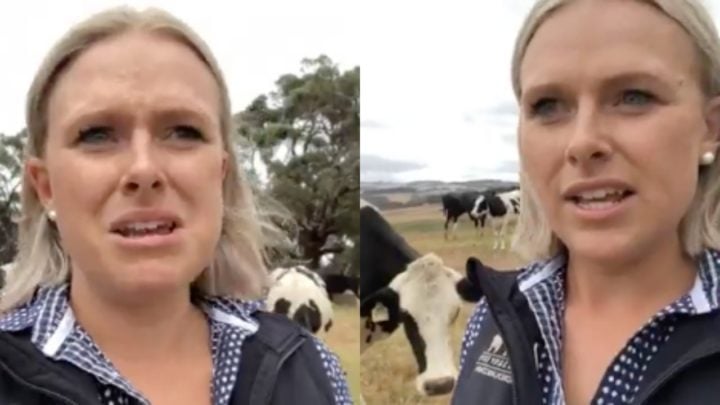 South Australia dairy farmer Casey Treloar announced in a heartbreaking Facebook post that her family's farm will no longer be in business due to low milk prices. Source: Facebook/ Casey Treloar

A young South Australian dairy farmer has bid a tearful goodbye to the industry as her family’s farm struggles to get by amid the ongoing milk crisis.

Third-generation farmer Casey Treloar took to social media over the weekend to share a heartbreaking post on the farm’s closure claiming one dollar supermarket milk prices contributed to its downfall.

Fighting back tears, the passionate worker said despite their dedication to the industry the farm in Parawa, around an hour and a half south of Adelaide, can no longer afford to keep going.

Standing in a paddock with a herd of cows in the background, Casey said although they live in a productive dairy farming area, there is no hope for them anymore.

“Look this is a video I hoped I wouldn’t have to film,” Casey began. “As many of you guys know, the dairy industry is in a pretty tough spot.

According to the young farmer they are only getting around 38 cents a litre for their milk which is “completely unstable” – a situation many dairy farmers across the country can relate to.

“We can’t really afford to keep going anymore,” a tearful Casey said. “We are forever the optimists that the industry will get better but for our family, we’ve come to a point where we can’t do it anymore.

“It breaks my heart because it’s something a lot of you guys know, I’ve become very involved in.”

While Casey didn’t place blame on supermarkets and their dollar-a-litre milk, she said it has devalued their product, impacting the farm greatly. Although the young farmer and her family have been forced to cease business, Casey called on Australians to help support the remaining dairy farmers across the country before it’s too late.

“Milk that we produce isn’t worth as much as it once was and it’s to the point that our production is so much that we cannot sustain producing milk the way we have in the past,” she continued.

“This is the future of farming where we’re going to get to a point where there won’t be these family farms anymore. We need all the support we can get.”

The heartbreaking post has garnered a lot of attention from the public who showed their support for the farmer. Hundred of thousands of people, including friends, family and complete strangers from across the country, claimed they will do all they can to help struggling farmers.

“I feel so bad for you and your family of cows. So sad. I hope you are blessed by all you have done. May you find peace after this. Devalued products by processors is unacceptable,” one person commented.

Another wrote: “This is heartbreaking. I grew up on a dairy farm in the Hunter Valley, NSW. Please know that there are many ordinary people who understand. I pray your family find peace and a future they can enjoy”.

A third said: “It is criminal what the big supermarkets have done to primary producers. I have never bought the cheap milk”.

This isn’t the first time an Aussie farmer has taken to social media to express their thoughts about unfair milk pricing.

Last year a dairy farmer penned an emotional post on the Facebook page for Tommerup’s Dairy Farm, in Kerry, QLD, pleading with customers to sign a petition which aimed at pressuring supermarkets such as Coles and Woolworths to increase milk prices by 10 cents a litre as a drought levy, which would go directly into the pockets of struggling farmers.

“Enough is enough and it’s time to speak up in a united voice,” the post read. “Please join our family in taking a stand. Please sign this petition and make it known that you don’t support the crippling of farming industries with unrealistic pricing. People power can make a difference.”

What are your thoughts on this story? Do you know someone who has been impacted by the milk crisis?