‘Get the facts straight’: Top surgeon clashes with Georgie Gardner over huge fees 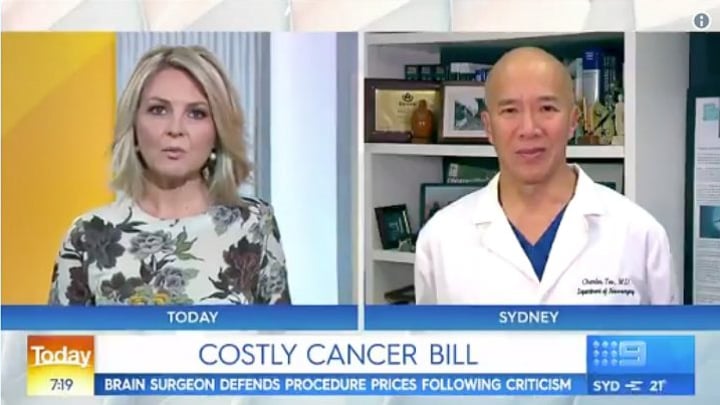 Georgie Garden found herself in the middle of a heated discussion with neurosurgeon Charlie Teo as they discussed the high price of life-saving surgery. Source: Twitter/ The Today Show

Brain surgeon Charlie Teo has slammed doctors criticising him over costly procedures in a heated discussion on the Today show, as he told host Georgie Gardner to get her “facts straight”.

The coveted neurosurgeon was thrust into the spotlight this week over the fee he is charging to perform life-saving surgery on a young girl who has been given just weeks to live.

On Wednesday Amelia “Millie” Lucas will go under the knife for a procedure that will likely save her life. However, is hasn’t been easy for the girl whose parents were forced to crowd fund more than $100,000 to afford the costly surgery, with Teo being largely blamed for charging the hefty sum.

Now, in a chat on the Channel Nine program, the surgeon has hit back at claims he is taking home the money, claiming he would do the operation for free if other medical professionals “swallow their ego” and let him operate in their facilities.

When questioned about the high prices for operating on those who are in dire need, Teo said the majority of that doesn’t end up in his pocket, claiming most of the money actually goes to the private hospital.

“Let’s get our facts straight first,” he told Gardner. “The fact is that although some patients do pay over $100,000 that doesn’t all go to the surgeon or the team but into the private hospital which is accounting to their share holders, they have to make a profit.”

The surgeon went on to explain how other doctors are to blame for the staggering costs and are putting a stop to others wanting to undertake life-saving operations free of charge.

“It’s a little bit unfair,” he admitted. “If I was a child with cancer and in a foreign state, who wants the very best care, I think it should be able to be done in the public system.

“But unfortunately, if it’s done in the public system, you’ll know few people have swallowed their egos.”

Teo said there are ways for doctors to perform surgery at facilities that are deemed a centre of excellence. However, this requires endorsements from other doctors which according to the neurosurgeon “is not going to happen”.

This prompted Gardner to ask whether he would work in public hospitals if the costs were covered, to which Teo replied he’d happily take on the job if the doctors allowed him in their facilities.

“For the last 20 years, if I get an interstate patient who is poor, who doesn’t have private health insurance, they have two options,” he explained. “They come to the private system in NSW and get done privately where they have to pay.

“Or I say to them, ‘Listen, if you can get your neurosurgeon from your state to invite me to your hospital, I will operate free of charge in the public system which benefits not only you but will benefit hopefully the whole neurosurgical community where they can learn my techniques.”

He added: “Have I ever been taken up on that offer? Never.”

The surgeon said it was just three weeks ago when he was contacted by a neurosurgeon at Westmead Children’s Hospital who asked him to help operate on a sick child.

“He swallows his pride. He gets me over there. A little child who is dying is operated on free of charge. The outcome is fantastic,” Teo said. “He’s home now, tumour out. All they need to do is swallow their ego.”

His comments come after professor at the University of Sydney School of Medicine Dr Henry Woo took to social media to slam Teo for charging the Lucas family for the life-saving surgery.

When surgeons are not performing a particular type of surgery, it is easy to blame the system. Often it is the actual surgery that is the issue. It is inappropriate to label surgeons as jealous, incompetent or stubborn when the reasons actually have validity.

In a series of posts on Twitter he wrote: “There is no surgery that is so difficult that only one or a handful or surgeons could perform it. Anybody making such claims should be a red flag. Surgeons are happy to learn new procedures if there is PROVEN benefit.

“When surgeons are not performing a particular type of surgery, it is easy to blame the system. Often it is the actual surgery that is the issue. It is inappropriate to label surgeons as jealous, incompetent or stubborn when the reasons actually have validity.”

Teo hit back at Woo for the comments during the chat on Today, telling the urologist to “get back to his lab”.

What are your thoughts on the price of surgery? Do you think more needs to be done to support patients who can’t afford operations?