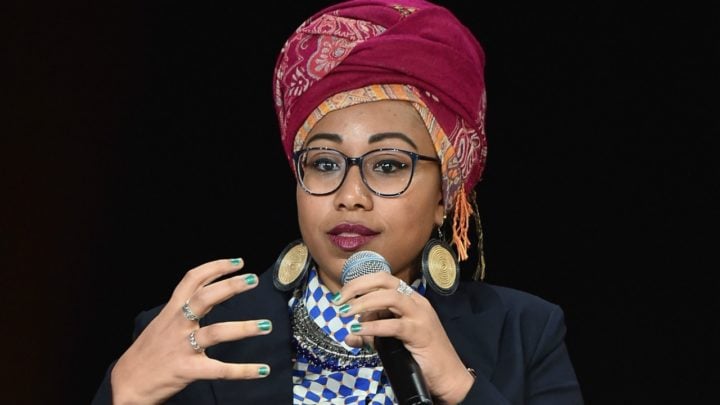 The former ABC presenter said New York is too "Anglo-centric", as she revealed why she opted to move to London almost two years ago. Source: Getty.

She is never one to shy away from controversy, having sparked debate in the past with comments about Anzac Day, politics and immigration, but Yassmin Abdel-Magied has now revealed why she decided to leave her home country of Australia behind in favour of London.

Former ABC panellist Yassmin, who moved to the English capital city in September 2017, said she chose London as her new base because nowhere else is “safe for a black Muslim woman”.

Writing on social media on Thursday, the Sudanese-born journalist and broadcaster revealed that her move to the other side of the world was recently questioned, writing: “Why did you move to London, someone asked me recently.”

She added:”‘Because where else is safe for a black Muslim woman who wants to live alone and do her own thing?'”

Yassmin then went on to confess that she had also considered New York City, but ultimately branded the Big Apple too “Anglo-centric”.

Abdel-Magied then asked her followers for suggestions of other cities she could have moved to with many people responding, suggesting the likes of Toronto, Edinburgh, Bologna and the German capital of Berlin as suitable options. However Yassmin quashed the idea of living in Berlin, adding: “Hmm… nah. They duno how to keep their eyes to themselves. I was stared at beyond belief in Berlin. Great policies tho, but it didn’t feel comfortable[sic].”

Read more: ‘I used to like Anzac Day’: Yassmin Abdel-Magied hits out at online trolls

Others replied to Abdel-Magied, agreeing that London is the “best city in the world”. One wrote: “London is London. People get on here. Yes, depressing crimes happen, but most of the time Londoners get on with each other. People can dress as they like, and so can Yassmin. Yassmin is a free thinker who stands up for herself, and for that, she has my respect.”

Another said: “I wanted to welcome you to London, mate. You’re one of us, the minute you ride the tube, or a bus. You’re one of us because we all live together, and get on with life, as best as we can. I hope you always feel safe and comfortable in the UK.”

Abdel-Magied moved away from Australia following fierce backlash against comments she made regarding Anzac Day in April 2017 when she shared a message online saying, “Lest. We. Forget. (Manus, Nauru, Syria, Palestine…)”, appearing to turn April 25 into political fodder for her views on Australia’s treatment of refugees.

The former ABC presenter caused waves in Australia with the message and her words were interpreted by many as a dig at Australia’s veterans and disrespectful to the sacrifices our diggers made in Gallipoli.

She later apologised and, just months later, moved to London, after her ABC show Australia Wide was cancelled.

Do you agree with Yassmin’s comments? Have you ever been to, or lived in, London?