Who are you calling The Beast? Chase star Mark Labbett’s incredible weight loss 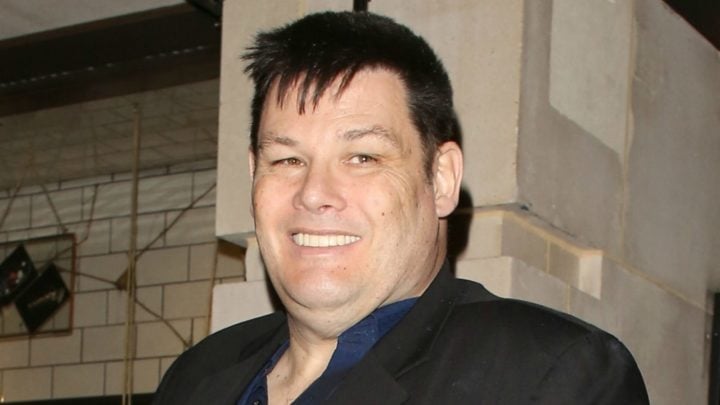 The Chase star Mark Labbett has changed a lot since this image was taken. Source: Getty.

He’s transformed his lifestyle since being diagnosed with type 2 diabetes and now The Chase star Mark ‘The Beast’ Labbett has revealed his incredible weight loss on a pub quiz night.

The Chaser looked super slimmed down as he posed for a photo with a huge personalised pork pie at the Cleveland Bay pub in Teesside, UK. Flashing a huge smile, he stood in a loose jumper and baggy jeans which showcased how much weight he’s lost even more.

Labbett, who was 27 stone (171kg) at his heaviest and stands at 6 ft 5, has shed the pounds over the last few months following his diagnosis – cutting out excess sugar from his diet. Pub manager Peter Rafferty stood next to him for the photo, jokingly using a small step to reach the same height.

Rafferty told Teeside Live: “He came up for the night, took part in our quiz night and sat at a different table for each round helping a different team. He was a great chap, everybody had their photo taken with him too. A great night was had by all.”

Labbett revealed he had beaten his first weight loss goal back in February 2018, writing on Twitter: “Lost four inches off my chest and six inches off my belly in last six months. So they have bought me a new suit for the show. First target achieved :).”

Since then however his efforts have truly ramped up following his health scare. Speaking of the moment he found out he had diabetes, Labbett previously told UK daytime show Loose Women he planned to make his diet much stricter.

“I have a very good relationship with my body,” Labbett told the panel at the time. “I’m in pretty good shape but recently I’ve been diagnosed with type 2 diabetes.”

The Brit was surprisingly upbeat about the diagnosis and took full responsibility for it. “Given the amount of sugar I’ve eaten over the years, I’m not going to complain,” he said.

The star admitted he has, in the past, eaten up to 10 bars of chocolate a day and accepted that this contributed to his diagnosis. “I’ve done the crime so now I’m doing the time,” he told the panel. “But I take the positives out of it.”

He went on to say that his diagnosis made it easier to try and lead a healthier lifestyle because he’s now got no choice. He added: “I’ve enjoyed being this heavy. I’ve generally always said that I’ve got away with it, but now I haven’t. So the weight’s coming off. I’ve lost a couple of stones so far.”

Any Australian who has been near a TV around 5pm on a weekday has probably caught an episode of The Chase at some point in their life. Based on the UK quiz show of the same name, the series sees everyday Australians go head-to-head with a quizmaster known as The Chaser.

While we do have our own Aussie Chasers, some of the UK favourites, including Mark Labbett and Anne Hegerty, travel to Australia to appear on the local version of the show. Better known as ‘The Beast’, Labbett is arguably one of the biggest stars.

Do you watch The Chase?