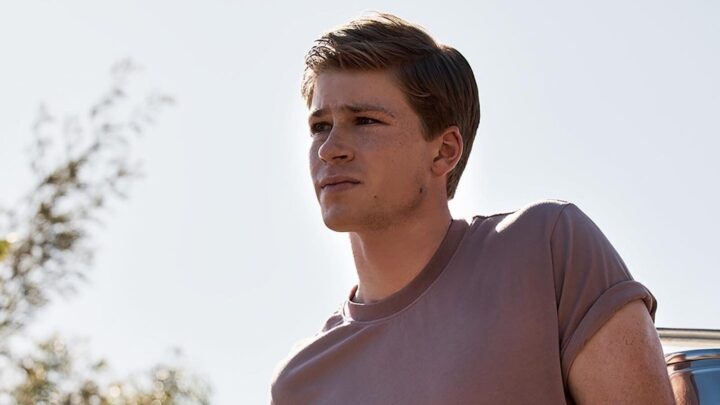 The 18-year-old is all grown up in his newest cover shoot. Source: Twitter @RobertIrwin

Usually spotted in head-to-toe khakis while wrestling crocodiles, Robert Irwin has been given a makeover that has rocked fans and has even got his mother and older sister, Bindi Irwin, singing his praises.

The 18-year-old zookeeper, and son of famous crocodile hunter Steve Irwin, has sent many Australians swooning after appearing on the latest cover of Stellar magazine, where he revealed his passion for fashion and joked about earning the title of the most stylish Irwin.

“If my family were here, they’d definitely be giving me some heat from it. They like to joke about my ‘shants’ or short pants. But I think we can confirm that shants are fashionable, right?”

On the magazine’s cover, the stylishly dressed and well-groomed conversationalist is all grown up as he cuts a slightly retro figure in a purple-hued shirt with rolled-up sleeves and black slacks, as he poses leaning against a car while delivering a handsomely brooding look to the camera.

In the accompanying photoshoot, Robert opens up on his father’s influence on the world of fashion.

“My dad wasn’t exactly a fashion icon, but he was iconic just in the fact that he made khaki cool,” Irwin said.

“I feel an incredible sense of pride when I put my khaki uniform on in the morning and it feels normal – more normal than anything else I wear.

Robert later tweeted photos from the shoot to his fans with a caption: “Well this was definitely something different, being asked to feature on the cover of Australia’s Stellar Magazine!”

Well this was definitely something different, being asked to feature on the cover of Australia’s Stellar Magazine! @StellarMagAU pic.twitter.com/GMPJKZSUew

His tweet has already gained over 19.5k likes and over 1000 retweets, with numerous social media users commenting on how good Robert looked for his shoot.

WOW, he’s grown up and looking good! He’s definitely way too young for me but I would be happy to put him on layby and pick him up in a few years time…hehe ????????????

Fantastic photos!! We’re so used to seeing you in khakis ???? It’s nice to see how the colors of regular clothes bring out your features much more ❤️ Doing your parents proud every day!!

Oh, mama @TerriIrwin Beware! Looks like your son is going to become the most eligible bachelor in the down [email protected]

However, his interview wasn’t all fashion fun, as the young influencer admitted to the magazine that growing up and navigating life as an adult after turning 18 last year has been a challenge.

“Because I am sort of stepping into adulthood, having turned 18, and navigating that is hard enough [but] when you are in my situation, and you do not have a father figure to guide you through, it’s really hard,” he admitted.

And while Robert has followed in his family’s footsteps as an Australia Zoo conservationist, he’s hoping to follow his own path and pursue a career as a photographer.

“I definitely want to experiment and try new things,” he told the magazine.

“I want to forge my own path and I’m really passionate about photography. I love being behind the camera. I am working on a coffee-table book with my photography that I’m going to be releasing later this year.”

The release of Robert’s Stellar magazine shoot comes after reports that Rober is set to follow his late father’s footsteps and leave his home at Australia Zoo to see the world and make nature documentaries, just like his dad.

What do you think about Robert's magazine cover photo?