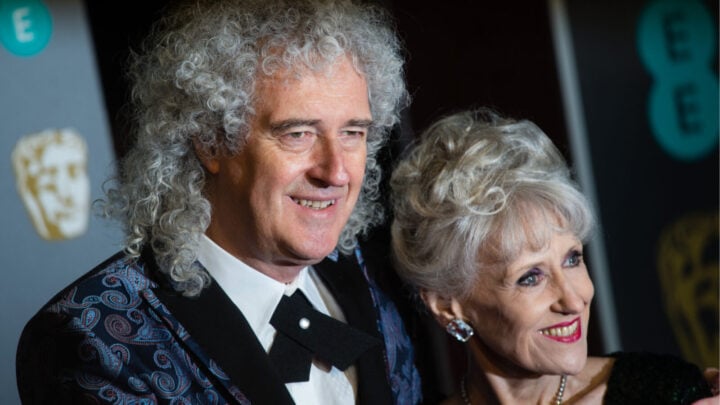 Brian May and Anita Dobson have been married since 2000. Source: Getty

He may be one of the most famous guitarists in the world and still tours regularly with Queen, but rock legend Brian May was recently hospitalised after suffering a heart attack, which he now believes was caused by coronavirus complications.

The 73-year-old has since recovered after having three stents inserted into his blocked arteries, but the ‘Bohemian Rhapsody’ rocker credits his wife of 20-years with saving his life as he recovered from the health scare.

May told British newspaper The Daily Express that his “incredible” wife Anita Dobson, who is best known for her role as Angie Watts in iconic soap Eastenders, nursed him back to health after he suffered the small heart attack in May.

“I was very, very poorly and it was the hardest thing,” he told the Express. “It was the worst thing, the complications that came on afterwards from the drugs that you have to take actually nearly killed me – much more than the heart attack. For about a month I could hardly crawl across the floor, I was really, really bad.

“She [Anita] was incredible. She totally saved my life because I couldn’t do anything and she just kind of nursed me, so I will forever be in her debt, she did an incredible job on me.”

Despite since testing negative to coronavirus, May believes he may have contracted the virus whilst touring Asia and Australia with Queen. “I think it’s possible that I had the Covid virus early on in the tour of Korea, Japan and Australia in January, and got through it, but it’s thickened the blood, which apparently it does, and that could have been the trigger that gave me the heart attack,” he said.

May first revealed he had suffered a heart attack via Instagram on May as he told fans he “could have died” after being rushed to hospital. May confirmed in an Instagram video that he had three stents put in after experiencing a small heart attack.

In the video, May revealed that his doctor drove him to the hospital after he started feeling the symptoms of a heart attack. “But I turned out to have three arteries that were congested and in danger of blocking the supply of blood to my heart,” he said.

He said he found the experience shocking because he thought he was “a very healthy guy”. “Nothing could tell me that I was about to be in real, real trouble, because I could have died from that, from the blockages that were there.”

He continued: “I walked out with a heart that’s very strong now, so I think I’m in good shape for some time to come. I’m incredibly grateful that I now have a life to lead again.”

Do you know someone who's suffered a heart attack?