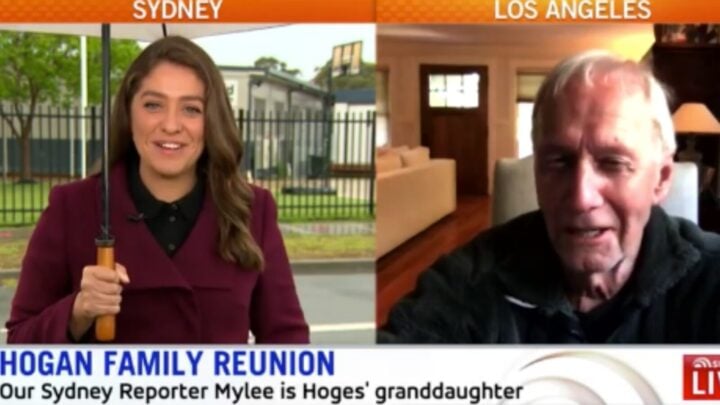 The heartwarming and hilarious moment Australian actor Paul Hogan was reunited with his reporter granddaughter has been captured live on air. The Crocodile Dundee star was appearing on Sunrise via video link to promote his new autobiography The Tap-Dancing Knife Thrower: My Life Without the Boring Bits when co-host David Koch surprised the 81-year-old with a friendly face.

“We’ve been reading recently that you’ve been stuck in LA and can’t get back here to Australia to say g’ day to your family, so we thought we’d bring your family to you,” David can be heard saying in a clip the Sunrise team has since shared onto social media. “It just so happens that your granddaughter Mylee is doing shifts for us today.”

The camera then cut to his granddaughter Mylee Hogan, who said: “Hey Pa! It’s been a while since I’ve seen you.”

A surprised Paul then can be heard saying: “That’s my granddaughter. I miss you a lot too.”

The 7News television reporter, 29, who is the daughter of Paul’s son Todd, then went on to explain what her famous grandfather is really like, revealing to her he’s simply just grandad.

“I don’t want to burst the bubble, but I guess we get all the boring bits,” she revealed. “To us, he’s granddad, the guy who wears jeans and joggers. And we have to go out to dinner early and only to places he knows so that he knows what’s on the menu before we get there.”

Mylee continued: “I get that great version! No, but we do get some wonderful stories, and I get to hear those wonderful stories from him which is such a privilege. We are so proud of everything that he has done. We miss you!”

The screen legend cheekily replied with: “That’s my granddaughter, and she’s a lady! She’s not a little child. But I don’t have any great-grandchildren.”

To which Mylee promptly responded with, in between laughs: “You’re going to have to keep on waiting there, Pa!”

Sunrise uploaded a video of the sweet exchange on their Facebook page with the caption: “Here’s the heartwarming and hilarious moment we reunited Aussie screen legend Paul Hogan with his granddaughter, 7NEWS reporter Mylee Hogan.”

Viewers at home found the reunion equally as sweet, with one writing on Facebook: “Aww love this,” while the post received a slew of likes and love and laughing reactions.

Did you watch this segment? Are you a fan of Paul Hogan?