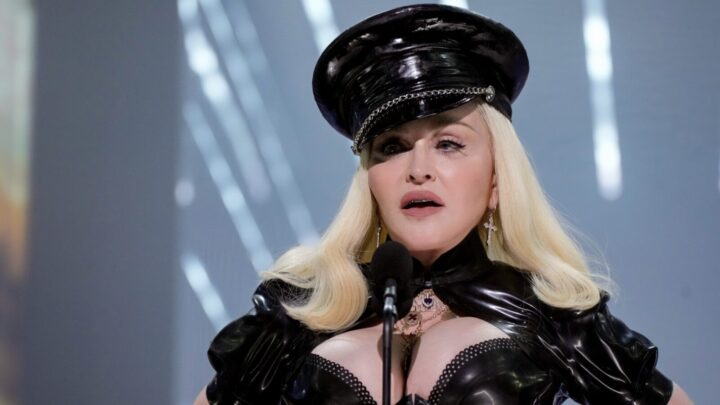 Madonna has told everyone to butt out about her explicit photos. Source: Getty

“Has the Material Girl gone too far?” the world is asking. Again.

The raunchy singer, who has built a four-decade career on being provocative and controversial, had the internet rolling its eyes this week after she shared a series of extremely risqué photographs on her Instagram account on Wednesday.

The explicit images show the Like a Virgin songstress rolling around in silky white sheets and flaunting her ample breasts in a revealing bondage-style bra. Later, she goes topless, only partially covered by a duvet, and squats over the bed to bite the black metal handrails; a gold-winged cherub angel on the wall behind her.

So far, so standard for Madonna, who published her daring coffee-table book Sex nearly 30 years ago.

In one of the most eye-popping images, which have left some wondering if there should be an expiration date on posing for sexually-explicit photos, Madonna bends over on the carpet below the bed in black high heels with her fishnet-clad derriere in full view. The most controversial shot, however, shows her lying half under the bed with her legs spread wide.

The 63-year-old singer’s fans took to the singer’s Instagram account to comment en-masse over the “porn-esque” images. A typical comment read: “This is getting kind of embarrassing now. Your children must be so proud of you. Stop showing your a**, we’ve seen plenty of it with the Sex book and it was brave then.”

Another fan added: “Now it’s just classless and it has nothing to do with your age… WHY MADONNA?…You are better than this!”

Meanwhile, popular British television presenter Lorraine Kelly, 61, branded the photos “sleazy” and told her viewers that the singer “doesn’t look good”. “She’s in great shape,” conceded Kelly on her flagship morning program Lorraine, “but I think they look pretty sleazy, but that’s just me. I don’t know what you think. Anyway, sorry. I know it’s like, ‘Oh no! Don’t say that!’ But … yeah. She’s fantastic but she doesn’t look good.”

The funniest celebrity reaction was from Serendipity star Kate Beckinsale, 48, who pranked her 22-year-old daughter Lily Sheen by pretending she had posted the explicit bare-bottom photo on her own Instagram account.

“Do you think it’s too much that I posted this,” Beckinsale asked her daughter via text. “The thing is, my a** looks good.”

Lily replied diplomatically: “I’m a little confused, I must say. I do think it’s a little much bit it’s also very arty.”

Lily confessed to crying “tears of happiness” and relief upon learning that her famous mum hadn’t revealed her protruding backside to the entire world after all, saying she would have been “concerned” if she had.

On Thanksgiving on Thursday, Madonna hit back at the public backlash by claiming she had once again been the target of “ageism” and “sexism”. “Giving thanks that I have managed to maintain my sanity through four decades of censorship…… sexism……ageism and misogyny,” she posted on her Instagram.

Australian entertainment reporter Peter Ford took to Twitter to condemn Madonna for her “tiresome and predictable” move to counter the negative public reaction as “ageist”.

And right on cue Madonna has taken to her social media to complain about misogyny and ageism etc etc. Just as I predicted she would. Coming up @morningshowon7 https://t.co/GkBkc0ge4t

Should Madonna stop flaunting her body in such explicit poses or do you think she is a feminist icon continuing to push boundaries?