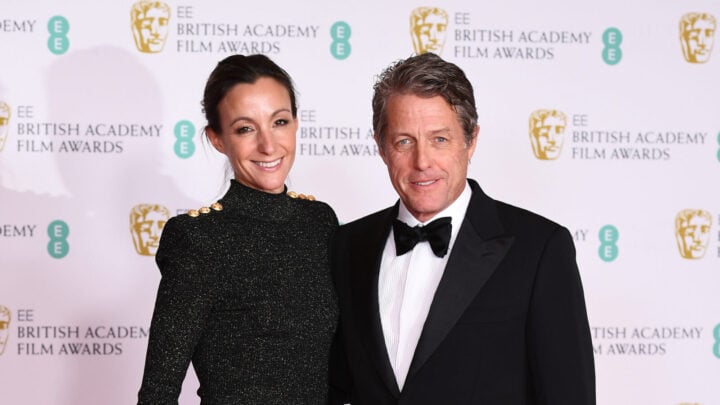 Hugh Grant has been upstaged on the red carpet by his significant other once again – and he’s loving it! Grant made a dapper appearance at the BAFTA 2021 Film Awards in London on Sunday, however, it was his glamorous wife Anna Eberstein, 41, who stole the show.

The English actor was famously upstaged by his former girlfriend Elizabeth Hurley at the 1994 premier of his movie Four Weddings and Funeral, when the model appeared on his arm wearing a slinky black Versace dress held together by safety pins. This time though, there were no plunging necklines and leg slits in sight, with Eberstein opting for a lovely black mini dress, which she paired with a casual up-do and strappy black heels .

Grant, meanwhile, looked charming in a black tuxedo, white shirt and black bow tie. The pair happily posed for the cameras as they hit the socially distanced red carpet at the Royal Albert Hall in London with a slew of other British celebrities.

Grant and Eberstein have three children together, but have chosen to keep them way from the spotlight. The Notting Hill star previously revealed they welcomed their first child John Mungo Grant in September 2012, but has not shared any details about the couple’s other two children, instead enjoying his family life in private.

While Grant and Eberstein posed on the red carpet in London, American stars were unable to travel to the event due to the pandemic and instead participated in a virtual red carpet. Renee Zellweger led the charge from the US, looking fantastic in a form-fitting metallic dress. The 51-year-old paired the off-shoulder dress with nude heels and wore her hair in relaxed waves.

Grant and Zellweger were no doubt disappointed they couldn’t enjoy the night together in person. The pair, who starred in two of the three Bridget Jones’s Diary movies together are good friends.

Despite admitting he’s had rocky relationships with past co-stars, Grant spoke openly about his close friendship with Zellweger in an interview with US radio show SiriusXM last year, revealing she was “one of the few actresses” he hasn’t fallen out with. He said the pair also enjoy the ancient pastime (it certainly feels ancient now, right?!) of exchanging letters and write long emails to each other.

He jokingly added in his famously dry humour that her letters in particular were very long – “at least 70 pages each” – and were “interesting stuff but quite hard to decipher”.

Do you like Hugh Grant's films? Which is your favourite?