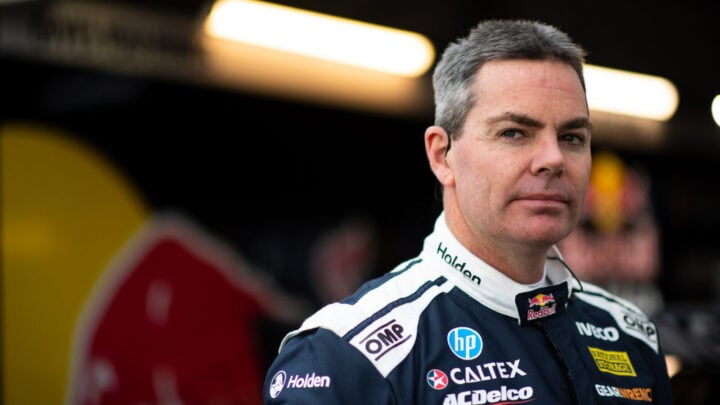 Craig Lowndes has revealed the extent of his online affair. Source: Getty

Racing car legend Craig Lowndes has revealed the details of a three-year love affair which almost tore his marriage apart, but bizarrely he’s never actually met the woman before.

Speaking to The Daily Telegraph, the 48-year-old revealed the details of the affair with a woman he only ever spoke to via Instagram and text message, saying now that he’s ended the relationship he’s determined to get his marriage back on track.

Lowndes made the stunning revelation on Friday, telling the publication he had been messaging the woman for three years before his wife Lara found out earlier this year. He said he was kicked out of the house when she found out.

The racing legend said the woman had been a “big fan”, who he got lured in by at a time when he was in a “bad place”. Now, after a “tricky” six months or so he and Lara have begun working through it all.

“She was a big fan that I got suckered into having an initial conversation with online,” he said. “Mentally I wasn’t in a good place, those messages that I sent, I personally believed they were between that third party and myself, and I still stand by the fact that I have never met this person physically… I haven’t.

“For me… I’m ashamed to be talking to you about this, it’s very sensitive to myself and Lara. Basically, I was in a bad place, but I’m not in that place anymore. I’m getting help. It is what it is, but I can honestly say Lara knows all about this and this third person is no longer in my life.

“Lara and I still live together, we had some time apart, but now we are committed to working through it all.”

In images of Lowndes and the third party’s Instagram conversations, he openly discussed his marital issues, even telling her at one point, “I would rather be with you”. In the series of messages, which can be read here, Lowndes expresses his desire to be with the woman and tells her he loves her.

“I’d love to sit opposite you and look into your eyes and soul,” he wrote in one message.

“So is my love for you baby. I want to start to show that side of me… I want you to know how much I love you,” he replied.

He even at one point writes, “Don’t message. She has gone crazy,” presumably in reference to his wife.

In April, Lowndes brought the social media relationship to an end, but this was only the beginning of what spiralled into months of torment from the scorned ‘other woman’. The couple revealed to The Daily Telegraph the woman harassed them and created multiple online accounts in order to send abusive messages to Lara.

“Social media is an evil thing at times, it can be very beneficial, but it can also be very evil… we don’t even know this isn’t a catfish,” he said. “Some of the s**t we’ve received is out of control, we have been tormented. It’s f***ing hard.”

To make the situation worse, images of Lara with a severely bruised eye were circulated at the same time, sparking rumours of domestic violence, an allegation which Lara vehemently denies.

“Marriages go through hard times, I would not wish on anybody what our marriage has gone through recently, it has been tough, but I’m standing by Craig,” she said. “It‘s been a pretty tricky six months or thereabouts, we’ve been going through an incredibly challenging time in our marriage.

“Craig and I independently have both been getting the support that we need, in speaking to someone, and from our family and friends. It‘s been a really horrid period in our life which we’re just trying to move on from and get this toxicity out of our life.”

Craig was previously married to his now ex-wife Natalie, to whom he has children Levi and Chilli.

What do you think? Is messaging someone harmless or still cheating?