Would you share a grave with a stranger? Apparently, it’s the future 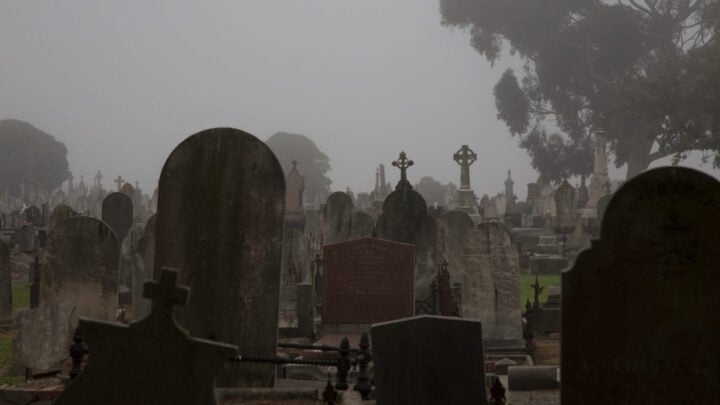 Population growth has led to a rapid overcrowding of cemeteries, but the proposed solution isn't for everyone. Source: Getty

While the majority of us now opt for cremation, research suggests a third of us are still choosing to be buried in a cemetery, and with the rise of our ageing populations, experts are predicting a big issue with overcrowding in our graveyards. With one suggesting a rather macabre solution that could see us all sharing a grave with a stranger.

The most recent figures from the Australasian Cemeteries and Crematoria Association (ACCA) show that of the 170,000 Australians who die each year, about 65 per cent choose to be cremated, while a third opt for a burial. But with Australian cemeteries filling up rapidly, and with Australia’s death rate on track to double by 2070, experts say the issue should be garnering more attention and solutions.

An article published on the ABC on Monday took a closer look at the issue of overcrowding in cemeteries and how long someone owns their gravesite, and it appears the answer is very different depending on where you live. Meaning, you may end up grave with a stranger sharing whether you like it or not.

For most Australian states and territories, your burial site is preserved under an indefinite lease on the land. In Tasmania and New South Wales, you have the option of leasing a grave with a finite term or the option of renewable term. In Victoria, ACT, Northern Territory and Queensland leases are permanent only, while in Western Australia and South Australia, they’re renewable only. While it’s different for each state, one expert says we should take a leaf out of South Australia’s book, which has been grave recycling since 1863 and currently reuses about 200 to 300 graves per year

Robert Pitt, CEO of the Adelaide Cemeteries Authority told the ABC that in SA, a grave site’s interment rights are issued for a period of either 50 or 99 years, after which they are available to be reused provided they have the approval of the families, who can opt to extend the lease. The law dictates that photos of the headstones and epitaphs must be taken in order to preserve the burial records.

“We have to try and contact the family [and] write to the interment right holder a year before it expires,” he said. “We put a notice on the grave to contact the administration. We advertise the site and have to wait for two years [after it expires]. If, at the end of two years, no one contacts us, we can then reuse the site.

“The headstone is taken away and crushed, and the stone is used back in the cemetery. Then we can do what’s called a ‘lift and deepen’, where we dig down and recover the skeletal remains, and put them [further] down at three meters in the same grave and they stay there forever.”

While stats seem to prove most Aussies only consider the two options, there are plenty of other alternate burial options for those unsure about sharing a grave with a stranger.

Futuristic and eco-friendly options range from Cryonics and liquid cremation right through to the newly proposed (and yet to be legalised in Australia) method of promession – being frozen by liquid nitrogen and shattered into a fine powder. Other increasingly popular and more ‘out there’ ideas include ashes being made into jewellery, tattoos and even fireworks or the option of donating your body to medical science. Eco-friendly burials are one of the options growing increasingly popular,  with ‘seed pod burials’ emerging as a common choice in a Starts at 60 community poll in 2019. This burial method sees people laid to rest inside organic, fully biodegradable pods, which are then buried beneath the earth with a tree or sapling planted directly above them. As their bodies decompose, the tree will be provided with nutrients to help it grow.

These days there are a plethora of options when it comes to farewelling someone dear to you or planning your own farewell, all that’s required is a little ‘out of the box’ thinking.

Would you mind sharing your grave with another, or having your loved one's grave buried over?