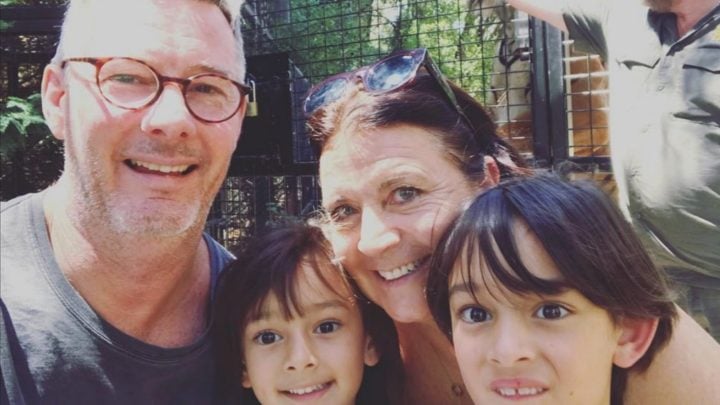 Barry Du Bois has opened up on the series of heartbreaks he and his beloved wife had to endure before finally welcoming their twin children through surrogacy.

The Living Room presenter, 58, has six-year-old twins Bennett and Arabella with his wife Leonie, after the couple flew to India in 2012 to welcome them from a surrogate mum.

He has previously spoken of his happiness at watching the precise moment they were created, and now speaking in an exclusive chat with Starts at 60, the proud dad has opened up on the agony the couple had to face prior to that joyous moment.

Leonie was diagnosed with cervical cancer in 2004 after suffering a series of miscarriages, and she was forced to undergo a hysterectomy at the time – stopping any hopes of carrying a child.

The couple looked into IVF and adoption, but eventually settled on surrogacy. Asked if he thinks the attitudes towards surrogacy in Australia are changing in a positive way, Barry added: “I would hope so, I can’t change the attitudes of other people but surrogacy was a great gift for us.”

Barry has previously been very open about his journey to becoming a father, and told Mamamia‘s No Filter podcast last year that being a father is a “gift”.

“Surrogacy for us was incredible. The closeness we had with the woman who was going to carry the embryos,” he told the news outlet at the time.

“Leonie was so in sync with her. I can recall really clearly one night she sat up in bed and said, ‘Something’s wrong. Something’s wrong.’ And you wouldn’t believe it, but the next day the doctor rang us from India and said, ‘There’s a problem, and if we were going to terminate one of the children, this is the time we would do it,'” Du Bois said.

“As it was, we said that, as long as everyone is safe, we’d like to push forward… Of course we got through it.”

Barry, who recently returned for the latest series of The Living Room on Channel 10, is himself battling cancer now, having been diagnosed with multiple myeloma in 2017 – his second cancer diagnosis after previously being told he had the same plasmacytoma myeloma in 2010.

Asked his advice for a husband or wife watching their spouse go through a health battle, Barry told Starts at 60: “I’m an ambassador of R U OK? And there’s always a positive in communicating, asking a question, engaging in conversation and following that up if you think there’s something amiss.

The new series of The Living Room is now airing on Channel 10 on Fridays at 7.30pm.

Have you or anyone you know welcomed children through surrogacy?