Saved by the bell! The extreme burial traditions people followed years ago 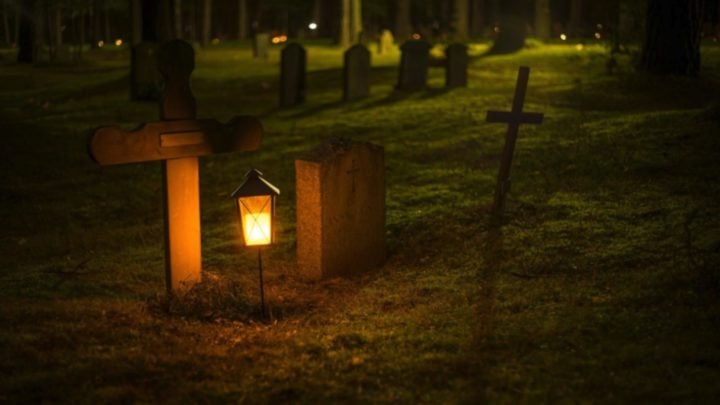 A few years ago there were some very extreme rituals to ensure you were dead before burial. Source: Pexels.

While death can be a scary subject to think about, most people today can at least assure themselves that there will be proof they’re officially dead before being buried or cremated, thanks to advances in medical technology. But many years ago it was a different prospect altogether.

Before neurological tests and medical equipment to check for heart rates and brain activity, doctors in the 18th and 19th centuries would rely on listening for someone breathing or feeling for a pulse – both of which may be missed depending how sick the person is. It’s shockingly claimed to have resulted in a few people being buried alive hundreds of years ago, pushing many to plan extreme pre-burial rituals to prove they were really dead.

The trend spread quickly throughout Europe and the US, as people tried everything from fitting bells to coffins for the person to pull a string on if they woke up underground, to inflicting extreme pain to a person’s body to ensure they didn’t react before being buried.

Just recently, a husband in Thailand claimed to have watched on as his wife, who had been pronounced dead three days earlier and placed in a coffin in a morgue, suddenly started moving moments before she was due to be cremated. It sparked a huge response from Starts at 60 readers, as many admitted it was their worst nightmare.

“One of my biggest fears is to be cremated alive. I have told my son to be very sure I am dead,” one reader wrote, while another added: “Wouldn’t be the first. Years ago they exhumed this coffin for some reason and when they lifted the lid there was scratch marks inside the lid from the person trying to get out.”

Here’s a look at some of the more extreme burial traditions from years ago:

As disease spread through the 18th and 19th centuries, so too did the fear of death and increasingly the fear of being buried alive. It sparked a surge in ‘safety coffins’ which were essentially fitted with a mechanism to release that person, or alert someone above ground, should they wake up after being buried.

While many were fitted up with feeding tubes and escape hatches, others had a string inside attached to a bell above ground that they could ring to alert someone to dig them out immediately. While many of these stories are just that – tales from years ago – many believe the phrase “saved by the bell” first originated from there.

The bells are one tradition that’s particularly well known now. One Starts at 60 reader commented: “[This was] why you put a string round your finger attached to a bell……saved by the bell.”

Possibly one of the most extreme traditions saw many people ask their family or loved ones to inflict painful practices on their body once pronounced dead, to ensure they were definitely gone. These could range from electrocuting the body, to holding a finger over a candle to check for any reaction.

Some of the bizarre methods were detailed in medical historian Jan Bondeson’s 2002 book Buried Alive. They included jabbing needles underneath people’s toenails, slicing feet open, sounding shrill noises next to ears, while one French clergyman even recommended thrusting a red-hot poker up, what Bondeson referred to as, “the rear passage”.

While the practices have all but died out as medical technologies have advanced, many people still wish for some physical proof of their own. One Starts at 60 reader recalled: “My grandmother had her doctor slit her wrists after death,” while another added: “My friend wants me to stick her with a hat pin to make sure she’s really dead because she’s claustrophobic & so afraid of confined spaces.”

Keeping the coffin at home for viewing

In a much less gruesome practice, worried families would often bring their loved one home and leave them on display for relatives to say goodbye for several days. While it was a mark of respect however, it also meant they could watch for signs of death such as rigor mortis or the first signs of decay.

One reader said: “It can be a real fear, my father didn’t want to be in hospital when he was dying of cancer, he was frightened that they would say he was dead when he wasn’t. That was why he wanted to die at home, which he did.”

As medical professionals began to learn more about listening to the heart, new methods were introduced to check for proof of death. But with the first stethoscope only introduced in 1816, getting that proof could often be tricky.

According to multiple reports, some people took the theory that a heart beat confirmed life to a new level. One German scientist, Middeldorph, is claimed to have come up with the ‘needle flag test’ which saw him prod a needle into the person’s chest, which was attached to a small fabric flag. He is said to have believed that if the flag moved, it meant there was a heart beat.

While visiting a loved one in the morgue now is a private affair, it wasn’t always the case. In fact, the word morgue comes from the French word morguer, or ‘to stare’. And in the late 1800s, Parisian morgues in particular became somewhat of an attraction for people to come and view the dead on show. One advantage however was more eyes watching for signs of life.

Meanwhile in Germany in the late 19th century, some bodies would be laid out on zinc trays which were filled with an antiseptic to reduce the chance of infection. It meant there would be the chance for that person to show signs of life in a safe environment, with many of them fitted to bells to alert a staff member immediately if they moved.

Have you planned what you'd like to happen when you die? Would you choose one of these traditions now?